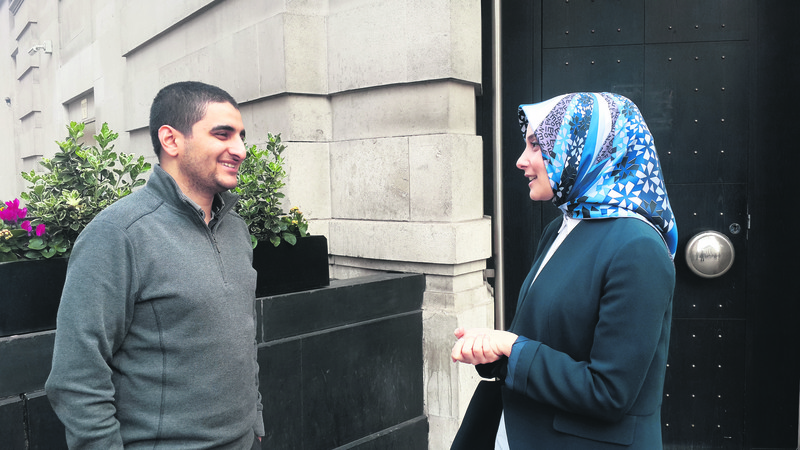 While the Egyptian regime's aggression continues toward members of the Muslim Brotherhood due to their opposition to President el-Sissi, Daily Sabah spoke to one victim's brother

It has been almost two years since the July 2013 military coup in Egypt. Egypt's first democratically elected president, Mohammed Morsi, is still in jail along with many top officials from the Muslim Brotherhood. One of these officials is Gehad el-Haddad, who is a senior adviser and media spokesman for the Muslim Brotherhood. He was the man who was the source of information on the ground for many media outlets during the Egyptian revolution. The son of Morsi's former foreign affairs adviser Essam el-Haddad, Gehad el-Haddad tweeted perhaps 1,000 times when the people took to the streets in Egypt in peaceful protest. He spoke to international media outlets during Morsi's time in power, before and after military forces raided al-Nahda and Rabaa al-Adawiya Square and killed hundreds of innocent men, women and children. He was the main English-language spokesman for the Muslim Brotherhood. Haddad has been in jail along with his father since September 2013. His case is known as "the media trial," and on April 11, 2015, Gehad el-Haddad was sentenced to life in prison. The evidence against him is that he conducted three interviews with The New York Times, an American TV channel –the Public Broadcasting Service (PBS) – and a Spanish newspaper – El Mundo. In one of them, he said: "I'm a wanted man for stating my opinion and for standing politically in opposition to the coup."

Gehad's brother Abdullah el-Haddad is also the spokesman for the Muslim Brotherhood in the U.K. He is an engineer but works as the head of the group's press office in London. Daily Sabah spoke to him about his brother and the latest developments concerning Egypt. He said everything in the country is part of a set up.

"The trial itself is fake like everything else – the court, the evidence, all of it is fake. There is no actual trial. This is just a political card [President] Abdel-Fettah el-Sissi is trying to use in order to justify and cover atrocities against the Egyptian people. We have Mohammed Badie who has been given four death sentences and dozens of other sentences for years in prison. My brother Gehad el-Haddad has been sentenced to life in prison. These trials do not adhere to normal procedures. The whole thing is fake, so any further step depends on what Sissi wants. There are visits from my family to my brother and father. They are in Al-Aqrab prison and they have the worst conditions. The prison is known as one of the worst in Egypt. They are in solitary confinement. They have only two hours a day for any need. However, still they have hope and faith. We also see them always smiling at the court during the trials. They give us a reason not to step down, not to give up. They tell us not to worry about them, but worry for the cause that they fought for. My brother's trial is just a part of a larger fight, our fight for freedom and our fight for justice. The verdict on my father's espionage case will be given next month. I am expecting similar verdicts, maybe a life sentence or death. They have fought for a cause, and whatever happens we need to continue to fight for the same cause. We will continue our resistance against such a military regime. In the meantime, there are about 40,000 people in prison. Thousands of people have been killed over the past three years. No one has taken responsibility for it. In fact they are blaming people on the streets. Human Rights Watch, Amnesty International and many other humanitarian organizations all stated that this is a crime against humanity. Someone needs to take responsibility either in the police or the army."

He said the country never received international support. Even though major human rights organizations say that human rights are being violated, world leaders closed their eyes to the fact because they put their interests over their principals.

"I believe it is very clear now that we are living under a dictatorship. We will continue our non-violent resistance against the regime. We need to gain back the Jan. 25 revolutionary spirit. We need to be united again. It is important to show the international community that there are many kinds of human rights violations. They need to take steps to put pressure on the junta. They need to put their principals ahead of their interests, they need to look at the future of Egypt. There is no stability in the country, the economy is getting worse. People have started to talk about theories of dividing the country. We are witnessing what is happening in Sinai. It's as if it is a separated district of Egypt. People are suffering from extremism and authoritarianism. They have to choose between killers. However, at the same time the Egyptian people do not see international support as the main factor to aid the continuation of resistance. They believe the change in Egypt will come from the Egyptian people themselves. The international community may have accepted Sissi as president, but that is only because he holds the weapons. They need to support the cause of the Egyptian people and the democratic cause of the country. The latest polls show 42 percent support for the Muslim Brotherhood. However, it doesn't mean that the other 58 percent don't believe in the fight. Egyptian people still believe in the fight for freedom and justice. We need to stick with the people who believe in change and believe in the future of Egypt. The protests are ongoing in the country. We documented 4,367 protests last year. This year, the protest frequency remains the same. People are determined more than ever because most of them have close relatives either killed or in jail. This fuels them to continue to fight."

"Turkey's history and its experiences are very important to us. Turkey has been through many coups. Today, even though it has been many years, justice has eventually come. Military figures who were responsible for the coups are now in court and being prosecuted. This gives us hope. Some people find our situation similar to [former Turkish Prime Minister Necmettin] Erbakan in the past. They think that we need to do what Erbakan did in the '90s. We need to just step back and rebuild the whole thing. However, some people say that Egypt is not Turkey. The conjuncture, the society is different, and we may have a chance for resistance. We find Turkey s experiences really close to ours and are trying to learn from that."
Last Update: Apr 21, 2015 1:08 am
RELATED TOPICS