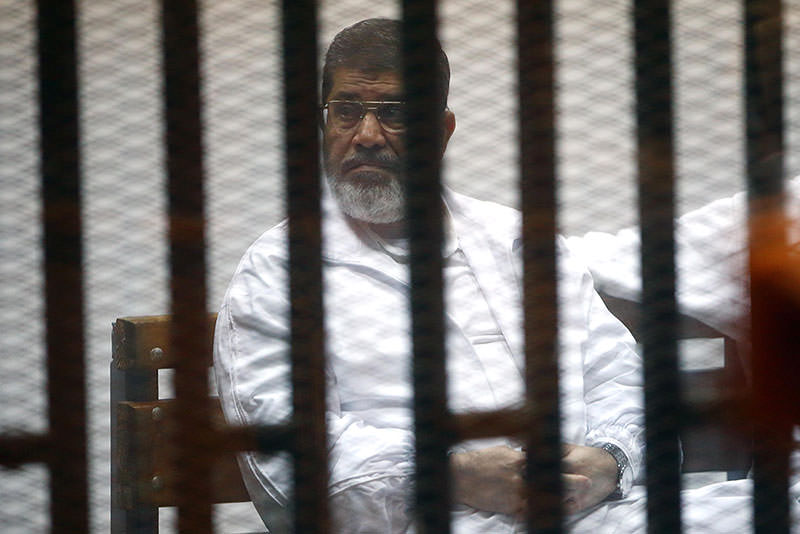 An Egyptian court yesterday sentenced Egypt’s first democratically elected president, Mohammad Morsi, to 20 years in prison despite concerns by the international community of the politicization of the judiciary

Morsi and the Muslim Brotherhood that played a great role in the deposition of former autocrat President Hosni Mubarak are at the receiving end of heavy-handed sentences while Mubarak and members of his government increasingly find themselves acquitted of criminal charges. During the hearing, Judge Ahmed Youssef issued his verdict as Morsi and other defendants in the case, mostly Brotherhood leaders, stood in a soundproof glass cage inside a makeshift courtroom at Egypt's national police academy.

Seven of the accused were tried in absentia. In addition to Morsi, 12 Brotherhood leaders and hish supporters, including Mohammed el-Beltagy and Essam el-Erian, also were sentenced to 20 years in prison. Youssef dropped murder charges involved in the case and said the sentences were linked to the "show of force" and unlawful detention associated with the case.

Morsi was found guilty along with 12 co-defendants of inciting the murder of demonstrators during clashes between his supporters and opponents outside eastern Cairo's Ittihadiya presidential palace in December of 2012. Although a total of 11 people-including eight Morsi supporters-were killed in the palace violence, the trial only addresses the death of one reporter and two anti-Morsi demonstrators. The defendants, including senior leaders of Morsi's Muslim Brotherhood, were also convicted of mobilizing supporters in order to "intimidate, detain and torture" dozens of Morsi's opponents who had camped out for days outside the palace. Abdel-Moneim Abdel-Maqsoud, the chief defense lawyer, told The Anadolu Agency that the defense team would not appeal the verdict before first consulting with Morsi.

"We will not file an appeal without obtaining [Morsi's] approval, since he does not recognize the trial," Abdel-Maqsoud told AA. Yasser Abdel-Hamid, one of the plaintiffs, said the verdict handed down against Morsi and the others was "satisfactory." "We are satisfied with the verdict, even though we did not expect the court to acquit [Morsi and his co-defendants] of premeditated murder charges," he told AA. Abdel-Hamid said he expected prosecutors to appeal the court's decision to clear Morsi and his co-defendants of the premeditated murder charge. Tuesday's verdict, which remains subjects to appeal, was the first against Morsi since his ouster and detention by the army in mid-2013. Since then, he has been slapped with numerous criminal charges, which he and his supporters insist are politically motivated.

After el-Sissi took over the power, the international community voiced its concern weakly against the human rights violations, mass death sentences, arbitrary detentions and the suppression of all opposition groups by the el-Sissi rule, despite the repeated warnings of rights groups. Moreover, the U.S. did not condemn the mass killing of people in Egypt as happened in Rabaa Square in 2013. The systematic and widespread killing of at least 817 demonstrators by Egyptian security forces in July and August 2013 probably amounts to crimes against humanity, Human Rights Watch (HRW) said in a report, released last August. "In Rabaa Square, Egyptian security forces carried out one of the world's largest killings of demonstrators in a single day in recent history," said Kenneth Roth, executive director of HRW. The Cairo administration shook the world frequently last year as Egyptian courts sentenced hundreds of people to death and to life in prison.

A recent report by the Egyptian Center for Economic and Social Rights, a local NGO, said that more than 41,000 Egyptians had been subject to prosecution since Morsi's ouster. "The death sentences are yet another example of the bias of the Egyptian criminal justice system. These verdicts and sentences must be quashed and all of those convicted should be given a trial that meets international standards of fairness and excludes the death penalty," said Hassiba Hadj Sahraoui, Deputy Middle East and North Africa Program Director at Amnesty International. "The death penalty is a cruel and inhumane punishment in all circumstances. To impose death when there are serious doubts hanging over the fairness of the trial is outrageous and flouts international law," she added. Egypt announced at least 509 death sentences last year. Amnesty International also expressed concern about countries that resumed the practice of executions.