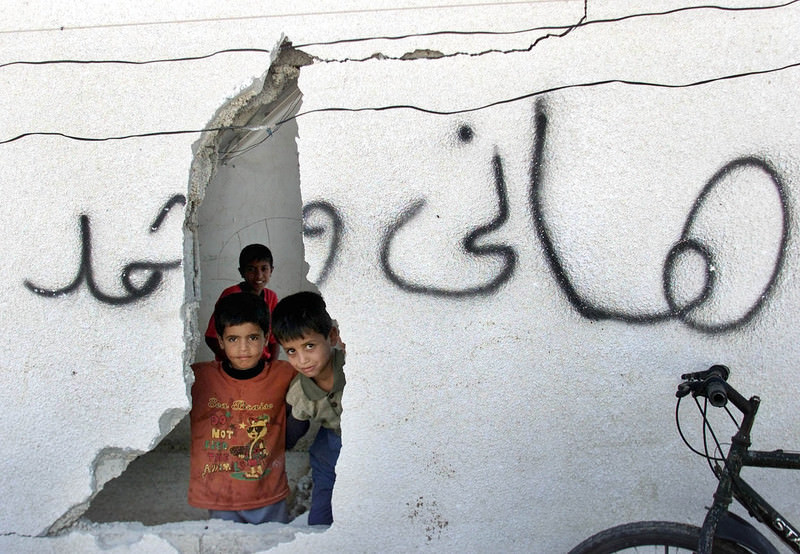 |Reuters Photo
by Yusuf Selman İnanç Apr 21, 2015 12:00 am
Last year's Gaza conflict broke out on July 8 when Israel launched airstrikes in Hamas-controlled Gaza. Israel deployed its ground troops in Gaza on July 17, which led to escalating tension between Israel and Hamas. The relentless Israeli attacks claimed the lives of at least 2,145 Palestinians, mostly unarmed civilians. The U.N. reported that more than 75 percent of those killed in the Gaza assault were civilians. According to the Palestinian Health Ministry, the Palestinian death toll included 578 children, 261 women and 102 elderly people. Moreover, tens of thousands of Palestinians now face a deteriorating humanitarian situation, and around 500,000 Palestinians were displaced as a result of the demolition of their homes and livelihoods. Much of Gaza's territory has been affected by evacuation warnings or declarations of "no-go zones" by the Israeli military, causing many Palestinians to seek refuge in safer areas.

A report recently released by Defense for Children International (DCI) revealed through statistics the extent to which Gazan children suffered from Israeli aggression. In the 60-page-long report, the group underlined that 2014 was one of the worst years for children since they were affected more than any other group. "Evidence and testimonies collected by DCIP's Gaza-based monitoring and documentation team showed that places that should have provided children with shelter and safety were not immune from attacks by Israeli forces. Missiles fired by Israeli drones and warplanes, artillery shelling and shrapnel scattered by explosions killed children in their homes, on the street as they fled from attacks with their families and as they sought shelter from the bombardment in schools," the group said in the executive summary of the report.

The report also exposed that Israel directly targeted children. "In a number of incidents, evidence suggests that Israeli forces directly targeted children. In one such case, Rawya Joudeh, 40, and four of her five children were killed by an Israeli drone-fired missile as they played together in the family's yard in Tal al-Zatar, Jabalia refugee camp, North Gaza, on the afternoon of August 24. The children were aged between 6 and 14. No day more clearly demonstrates the indiscriminate and extreme violence that characterized the offensive than Sunday, July 20, which proved to be the deadliest day for children throughout the Israeli offensive. A nighttime and ground assault on the residential Shuja'iyya neighborhood of Gaza City killed 27 children and injured at least 29 others. On the same day in Khan Younis, in the southern Gaza Strip, 18 children from the Abu Jami family were killed when an Israeli warplane destroyed their home as they sat down for dinner. In total, 59 children across the Gaza Strip lost their lives on July 20," the report said.

The respective death toll from both sides was 2,220 Palestinians, including at least 1,492 civilians, and five Israeli civilians, including one child, and 67 Israeli soldiers, the report stated. It further detailed that "the Israeli military offensive lasted 50 days between July 8 and August 26, dubbed Operation Protective Edge, and killed 547 Palestinian children – 535 of them as a direct result of Israeli attacks. Another 3,374 children suffered injuries in attacks, including more than 1,000 children whose wounds rendered them permanently disabled."

The report also highlighted that Israeli aggression toward Palestinian children took place systemically. "Israeli armed forces have been regularly implicated in serious, systematic and institutionalized human rights violations against Palestinian children living in the Occupied Palestinian Territory (OPT). Children affected by armed conflict are entitled to special respect and protections under international law, but Israel has consistently violated these protections through indiscriminate and disproportionate attacks that have resulted in large numbers of child fatalities and injuries," the report said.

As a summary of the incidents, the report accused Israel of conducting deliberate operations against children and called on the international community to demand an end to the blockade on Gaza imposed by Israel for a decade since Hamas took power in the densely populated area after being elected. "Palestinian children have often paid the highest price in Israel's repeated military offensives, while also suffering from a man-made humanitarian crisis created by Israel's eight year-long blockade of Gaza. This has hindered any meaningful efforts toward implementing comprehensive protections for children living in the Gaza Strip. In a context where systemic impunity is the status quo, the need for justice and accountability is urgent. While Israeli authorities have selectively opened their own investigations into several incidents occurring during the latest military offensive, previous experience has shown that Israeli authorities persistently fail to investigate alleged violations of its armed forces in accordance with international standards. The international community must demand an end to Israel's illegal blockade of the Gaza Strip, investigate allegations of war crimes and hold the perpetrators accountable. Without an end to the current regime of collective punishment, targeted assassinations and regular military offensives, the situation for Gaza's children is all but guaranteed to further deteriorate," the report said.
Last Update: Apr 21, 2015 4:53 pm
RELATED TOPICS