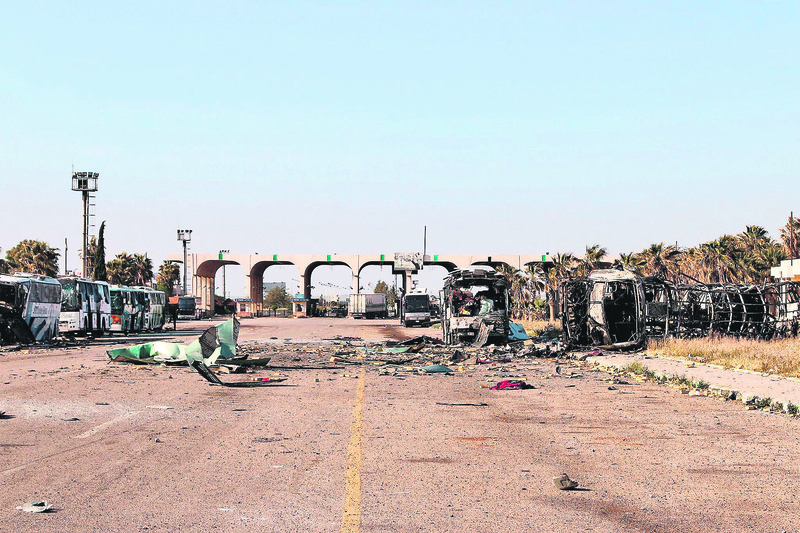 by Apr 24, 2015 12:00 am
Syrian rebels' seizure of the main frontier crossing with Jordan has dealt a heavy blow to the Damascus government's efforts to revive a once thriving export trade crippled by civil war, and is also hurting businesses across the region. Western-backed mainstream insurgents took control of the Nasib crossing three weeks ago, closing the chief conduit for bilateral trade worth over $2 billion a year.

Along with Syrian and Jordanian firms involved in the border trade, Lebanese exporters are also feeling the pain as they are no longer able send goods by truck through Syria and Jordan to their major markets in the Gulf. Exporters are being forced to turn to a far more costly sea and land route via Egypt to reach consumers in the wealthy oil producing states. "Nasib in particular is a catastrophe for us and for our products and also for the Jordanian side too because it also handled cargo and commercial exchanges," Muhanad al-Asfar, a senior member of the Syrian Exporters' Union told state television this week.

Syria, home to an ancient mercantile culture, was once a crossroads for trade between Europe and the Arabian Peninsula, carrying billions of dollars of goods arriving from Turkey and heading for the Gulf. Its own producers were also major suppliers to the region.

This trade has dived during four years of crisis, which began with a peaceful uprising against President Bashar al-Assad and descended into civil war. Now Damascus is trying to rebuild Syrian industry and exports to withstand sanctions imposed by the West and defeat the insurgency.

At least 40 percent of industrial capacity was left idle, but firms have moved some production away from areas worst hit by the fighting. The government is pushing them hard to raise exports needed to earn scarce foreign currency and boost imports of essential raw materials.

"Syria's priority is to get foreign exchange and not to import goods that are produced locally. I want to preserve my foreign currency to buy essential goods," Thaer Fayad, head of foreign trade in the Economy Ministry, told state television.

Syrian exports climbed back to $1.8 billion last year, the highest level since the crisis began in 2011, according to Ihab Smandar, the president of the state-run Exports Promotion Authority. However, this fell far short of the import bill, which he estimated at $4.3 billion, and remained a small fraction of exports in 2010 which totalled $12 billion.

Until now Syria's southern border has played a leading role in the revival drive: Jordanian figures show two-way trade with Syria was in the region of $2 billion last year.

The Nasib crossing on the main Damascus-Amman highway grew in importance due to a steady rise in exports of garments and consumer goods from the plants that Syrian entrepreneurs relocated to government-controlled areas in Damascus and the Mediterranean coastal region.

The timing of the closure could not have been worse for Syrian farmers as a good rainy season had created a surplus in recent months of produce ranging from apples to citrus fruit that was available for export.

Other major land routes are not an option for official trade. In the north, the Bab al Hawa and Azaz crossings with Turkey are also in rebel hands while most routes into Iraq are controlled by Islamic State militants. The only major exception is Yarubiyeh, but that is held by Syrian Kurds.

Jordan, a U.S. ally, has backed the mainstream rebels but still has diplomatic relations with Syria. Close commercial ties link many businesses in both countries while Jordanian-owned banks are a pillar of the Syrian financial system. Hundreds of Syrian investors who have lost their factories have also relocated their operations to Jordan.

Amman was therefore keen to maintain the border trade and used its influence with rebel groups to stop them taking over Nasib. But they eventually moved in, apparently to pre-empt a takeover by the Nusra Front, the Syrian affiliate of al-Qaida.

About 300 trucks had been crossing a day from Syria, a third of which were Lebanese vehicles heading to the Gulf, despite heavy fighting in the area. This traffic was down from 1,000 a day before the crisis, but was one of the few remaining signs of normality in official cross-border trade.

"When you look at turmoil around you, this was the major gateway in the Levant to the Gulf," said Mohammad al-Dawoud, head of Jordan's truckers association that has 17,000 trucks.

For Jordan, exports worth in excess of $1 billion a year are at risk, mainly raw materials for Syrian industrialists and supplies to U.N. agencies. Loss of this would inflict another blow to a debt-ridden country struggling to accommodate more than 600,000 Syrian refugees.

"The impact of the closure is felt on all sectors of the economy," said Nael Al Husami, CEO of Amman Chamber of Commerce, a major business lobby group.

Lebanon, with almost 70 percent of its fresh produce to the Gulf going through the crossing, is also suffering. Lebanese officials estimate industrial and agro-exports worth $1 billion would now have to move to costlier sea routes.