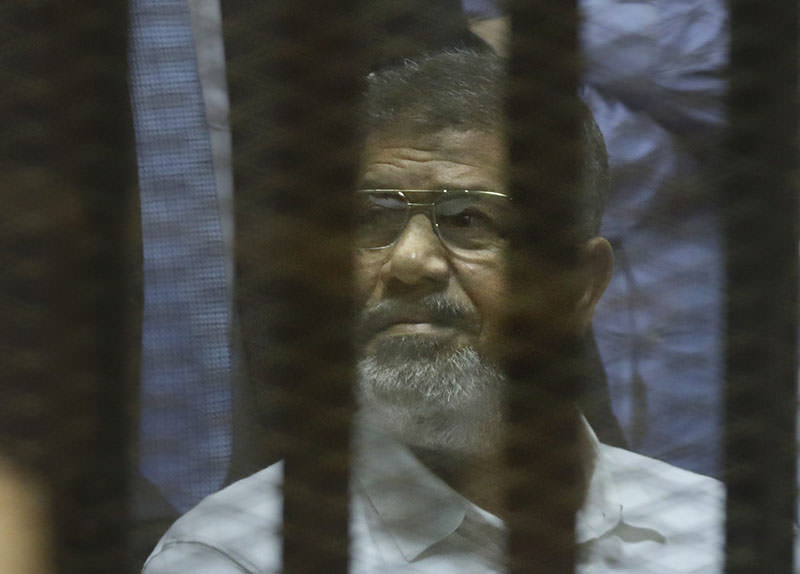 | AP Photo
by Daily Sabah with Reuters Apr 26, 2015 12:00 am
The trial of Egypt's first democratically elected president, Mohammed Morsi, who was deposed by the army and sentenced to 20 years in jail, was "badly flawed" and appears to have been politically motivated, Human Rights Watch said on Sunday.

A court on April 21 convicted Morsi and 12 other Muslim Brotherhood members of violence, kidnapping and torture over the deaths of protesters in 2012. They were acquitted of murder, which carries the death sentence.

Morsi and the Muslim Brotherhood that played a great role in the deposition of former President Hosni Mubarak are at the receiving end of heavy-handed sentences while Mubarak and members of his government increasingly find themselves acquitted of criminal charges. During the hearing, Judge Ahmed Youssef issued his verdict as Morsi and other defendants in the case, mostly Brotherhood leaders, stood in a soundproof glass cage inside a makeshift courtroom at Egypt's national police academy.

Human Rights Watch said Morsi's detention without charge for more than three weeks after his removal from office violated Egyptian law, and it criticized the prosecution's heavy reliance on the testimony of military and police officers.

"Whatever political responsibility (Morsi) may have, the prosecution didn't establish his criminal guilt in this case", the rights group said in a statement entitled "Egypt: (Morsi) Trial Badly Flawed".

It also cited a spokesman for the defence team saying the lawyers were only allowed to visit Morsi once in November 2013. Another lawyer was cited as saying the defence did not call witnesses out of fear for their safety.

Reuters could not immediately reach a foreign ministry spokesman for comment on the report, but a government statement last week rejected criticism of the Morsi's sentencing as "unacceptable interference in (Egypt's) internal affairs, let alone disrespect of the rulings of the Egyptian judiciary."

Harsh rulings against thousands of Mursi supporters, including death sentences handed down in mass trials, have been widely condemned abroad.

HRW also said the authorities had not investigated the killings of Morsi supporters at the 2012 demonstrations, creating "an appearance that the case was politically motivated against the Brotherhood".

Morsi faces charges in four other cases including leaking secrets to Qatar, conspiring with the Palestinian militant group Hamas to destabilize Egypt, and organizing a jailbreak during the 2011 uprising against Hosni Mubarak.
Last Update: Apr 26, 2015 4:07 pm
RELATED TOPICS