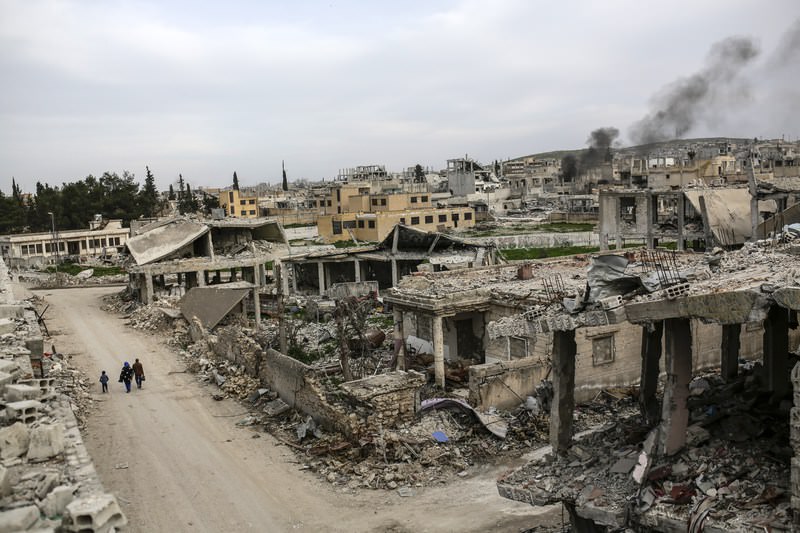 People walk along a conflict damaged street in the Syrian town of Kobani, also known as Ain al-Arab, on March 27, 2015 (AFP Photo)
by Anadolu Agency Apr 28, 2015 12:00 am
The last group of Peshmerga Kurdish forces fighting against the self-proclaimed Islamic State in Iraq and al-Sham (ISIS) in Kobani are set to leave, now the Syrian town is free of the terrorist organization, the Ministry of Peshmerga Affairs has announced on Tuesday

A total of 124 Peshmerga Kurdish troops will head back to Iraq on Tuesday night or Wednesday morning, officials said.

The fourth and last group of Peshmerga, which was in Kobani for two months, will make their way back home by plane and cars.

After ISIS launched an offensive in September 2014 to capture the Syrian town of Kobani - located only hundreds of meters away from the Turkish border - a group of 150 Iraqi Kurdish Peshmerga forces had arrived at Turkey's Şanlıurfa province on October 28, 2014, to join fighters battling ISIS.

A second Peshmerga battalion reached the ongoing battle after traveling through Turkey on December 3, 2014, .

A third group arrived in Kobani on January 16, 2015, from the capital of the Iraqi Kurdish Regional Government, Erbil, via the Suruc district of Turkey's southeastern Şanlıurfa province.

No more Peshmerga forces will be sent to Kobani, the ministry said.
Last Update: Apr 29, 2015 10:38 am
RELATED TOPICS