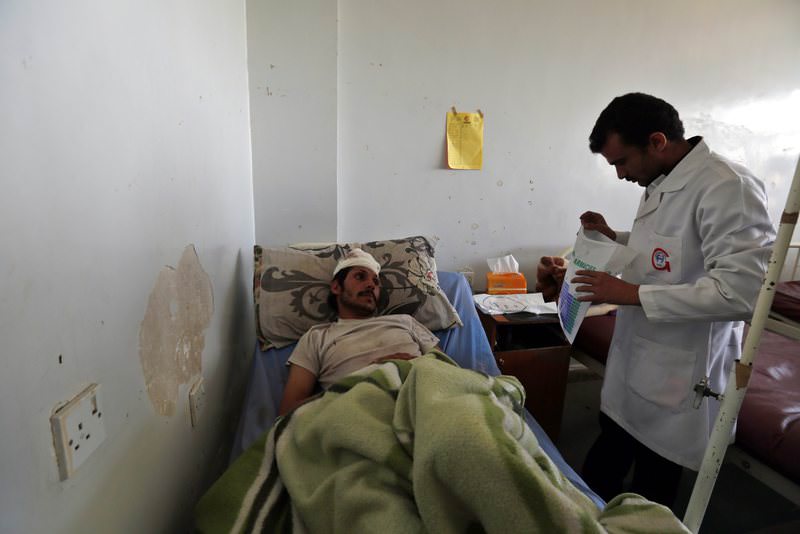 by Daily Sabah with DPA May 01, 2015 12:00 am
Bodies were strewn in the streets of Yemen's second city, Aden, health officials said on Thursday, and health workers were unable to retrieve them for burial amid fierce clashes between Houthi rebels and local militias.

In other developments, the self-proclaimed caliphate Islamic State of Iraq and al-Sham (ISIS) released a video showing its killing of 15 Yemen soldiers and the World Food Program (WFP) said it had to stop food distribution due to severe fuel shortages.

The Red Cross warned that the country's health sector was crippled by a lack of fuel and medical supplies.

A Saudi-led coalition backing President Abd Rabu Mansour Hadi against the mainly Shiite Houthi rebels has blockaded the country's ports and on Tuesday bombed the runway of Sana'a airport.

That step was taken to prevent the landing of an Iranian plane whose pilot ignored warnings, coalition spokesman Ahmed Asiri later said.

Saudi Arabia has said that Iran is fuelling the fight by arming the rebels, an accusation that Tehran denies. Saudi Arabia also accuses Iran of causing trouble in the Shia-dominated east, and acting in a secterian way.

The Red Cross charged that the warring parties in Aden showed lack of respect for health facilities.

The al-Jumhuriyya hospital "became a front line in the fighting," a Red Cross statement said, and all staff and patients had been forced to evacuate.

Health officials, speaking on condition of anonymity, said patients fleeing from the facility in the city's Khormaksar district had been unable to reach other hospitals as roads linking the city's neighbourhoods were blocked by Houthi fighters.

The officials said fighting in Khormaksar after a Houthi offensive on Tuesday night had killed 68 people.

Health workers were still unable to retrieve bodies from the streets for fear of coming under sniper fire, the officials said.

Fierce clashes were reported again on Thursday in the city's Tawahi and Mualla districts.

In the southern Shabwa Province, the ISIS in Yemen claimed it had killed 15 Yemen soldiers, including four who were beheaded, according to the US monitoring group SITE.

SITE called attention to a video posted on jihadist websites showing the extremists with knives and soldiers in civilian clothing kneeling in front of them and pleading.

The video shows them sharpening their knives and beheading four of the soldiers whom they denounced as "apostates." Ten men are shown blindfolded and shot in the forehead. The 11th man is riddled with bullets.

The heads of the four young men are then seen on the ground.

The video says that it was filmed by the Shabwa Press Center operated by ISIS. Shabwa province has claimed allegiance to the self-proclaimed caliphate.

Shabwa has been the scene of fierce fighting pitting both Houthis and army units against local militias trying to block the rebel advance. Al-Qaeda in the Arabian Peninsula has been very active in the province.

"We are reaching a point where we can no longer continue to move food ... to the people who desperately need it," said Purnima Kashyap, WFP country director in Yemen.

"This is a country where half the population are considered food-insecure, meaning that many families do not know where their next meal will come from," Kashyap added.

According to the UN, more then 1,200 people have died and 300,000 people have fled their homes due to fighting and aerial bombardment in the past six weeks.

The mainly Shiite rebels have for weeks been trying to gain control of Aden, the last stronghold of President Abd Rabu Mansour Hadi until he fled to Saudi Arabia in late March.

They have met determined resistance from irregular local fighters and militiamen loyal to Hadi in the port city and in other parts of the formerly independent south.
Last Update: May 01, 2015 11:27 am
RELATED TOPICS