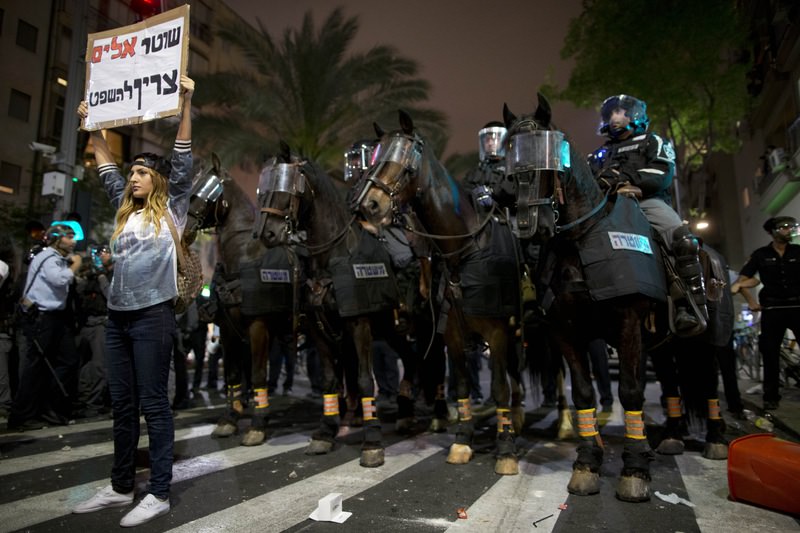 Clashes in Tel Aviv between Israeli police and the Ethiopian Jewish community in Israel, which claims to have long suffered from discriminatory policies, erupted after an Ethiopian Jews was beaten by police

Several thousand people from Israel's Jewish Ethiopian minority protested in Tel Aviv against racism and police brutality on Sunday, shutting down a major highway and clashing with police on horseback long into the night. At least 50 people-most of them policemen-were injured, Israeli media reported. Channel 10 said that 50 policemen were injured in clashes with Ethiopian Jews during the clashes. It added that police also arrested a large number of demonstrators. Earlier this evening, thousands of Ethiopian Jews demonstrated in Tel Aviv to protest Israeli police's heavy-handed practices against their community.

The protest was mostly peaceful during the day, but by nightfall became violent with at least 20 officers hurt and "multiple protesters" arrested, Police Spokesman Micky Rosenfeld said. Protesters threw rocks and bottles at officers in riot gear. Police deployed officers on horseback and used stun grenades to try and control the crowds in central Tel Aviv. Local media reported protesters tipped over a police vehicle and set fires near city hall. Channel 2 TV said the protesters came from all over the country. "I am here to fight for our rights," a woman named Batel from the northern city of Nazareth Illit told the station. "I don't want to be beaten by police," said the 21-year- old, who didn't give her last name. "My parents didn't immigrate here for nothing. I want equality."

Police chief Yohanan Danino told Channel 10 TV that "the use of violence by a small minority of the many protesters does not serve their struggle." He added, "Whoever harms police or civilians will be brought to justice." Activists told the station they don't want violence to escalate to the level seen in Baltimore where the death of a man in police custody sparked riots. One man held a sign reading: "Bibi, you had better not let Baltimore reach Israel," referring to Prime Minister Benjamin Netanyahu by his nickname. Police said thousands of people took part in Sunday's protest. Protesters blocked roads in central Tel Aviv as well as a main highway leading to the city during the day. It was the second such protest in several days and supporters say the demonstrations will continue. The first rally last week in Jerusalem turned violent as well, but on a smaller scale. Protestor's marched in Tel Aviv, with some blowing whistles or chanting "violent police officers belong in jail."

Netanyahu said he will meet Monday with representatives of the community as well as the beaten solider. Public Security Minister Yitzhak Aharonovich told Channel 2 the officers caught in the footage are "a disgrace" and are being investigated. He said Israel's police force "needs to examine itself" and that more needs to be done to help the Ethiopian community.

Israel's ceremonial president said Monday that an outbreak of violent protests by Ethiopian Jews has "exposed an open, bleeding wound in the heart of Israeli society" and that the country must respond to their grievances. Reuven Rivlin spoke a day after thousands of Ethiopian protesters clashed with police in Tel Aviv in an unprecedented scene of unrest and anger. The clashes reflected widespread frustration in the Ethiopian community, which three decades after it first arrived in Israel, has become an underclass plagued by poverty, crime and unemployment.

Ethiopian Jews begin migrating to Israel three decades ago and struggled greatly as they made the transition from an impoverished and developing country into high-tech Israel. Over time they have integrated more into Israeli society, serving in the military and making inroads in politics, sports and entertainment. However, many complain of racism, lack of opportunity, endemic poverty and routine police harassment.

These simmering frustrations boiled over after footage emerged last week of an Ethiopian Israeli in an army uniform being beaten by police. Sunday night's violence was the second such grassroots protest in recent days, and demonstrations are expected to continue. About 120,000 Ethiopian Jews live in Israel today, a small minority in a country of 8 million. Their absorption has been problematic, with many arriving without a modern education and then falling into unemployment and poverty as their family structures disintegrate. Many of the older generation work menial jobs men as security guards and women as cleaners have low literacy rates and suffer from high rates of domestic violence. Their children speak fluent Hebrew, study in universities and serve in the army alongside native Israelis. But despite such gains, the younger generation is still struggling compared to other Israelis.

Ethiopian Israelis also allege repeated discriminatory slights and, at times, outright racism. In the late 1990s, it was discovered that Israel's health services were throwing out Ethiopian Israeli blood donations over fears of diseases contracted in Africa. Some landlords have also refused them as tenants, and accusations have been raised that Israel has deliberately tried to curb birth rates among Ethiopian immigrants. "Anyone who attended the protest yesterday experienced at one point in their life humiliation based on nothing but skin color," said Mehereta Baruch-Ron, a Tel Aviv deputy mayor of Ethiopian descent. "We have had enough. It is time to do something." Ethiopian Jews trace their ancestors to the ancient Israelite tribe of Dan. The community was cut off from the rest of the Jewish world for more than 1,000 years.

Israeli clandestine operations rescued large groups of Ethiopian Jews from war and famine in the 1980s and early 1990s. Later waves of immigration also included the Falash Mura, members of a community that converted to Christianity under duress more than a century ago but have reverted to Judaism. They have faced even more problems assimilating because of vast cultural differences. Shlomo Molla, a former lawmaker of Ethiopian origin, said his generation failed to make a change and that hope lies with the younger generation who were born in Israel and are less intimidated by the establishment. "I call upon these young people to continue resolutely, so that perhaps they might succeed where my generation failed," he wrote in the Maariv daily. "The next stage of this battle should be civil disobedience. We should stop enlisting in the army, not join the police, and stop paying taxes, because if the state doesn't take its citizens into account, the citizens are also permitted not to take the state into account."
The images of black Israelis clashing with police have drawn comparisons to the unrest in the U.S. city of Baltimore. But Fentahun Assefa-Dawit, executive director of Tebeka, an advocacy group for equality and justice for Ethiopian Israelis, said there were few similarities. While both protests were sparked by police brutality, he said Ethiopian-Israelis have a different set of issues related to integration into Israel's modern, fast-paced society. He called on Netanyahu to make Ethiopian absorption a keystone of his new administration, which is expected to take office in the coming days. "Before it is too late we call on the prime minister to take the matter into his own hands," he said. "We urge and we demand of him to bring these issues to an end ... in four years I would want to see this prime minister say 'I'm glad I did' instead of 'I wish I had.'"