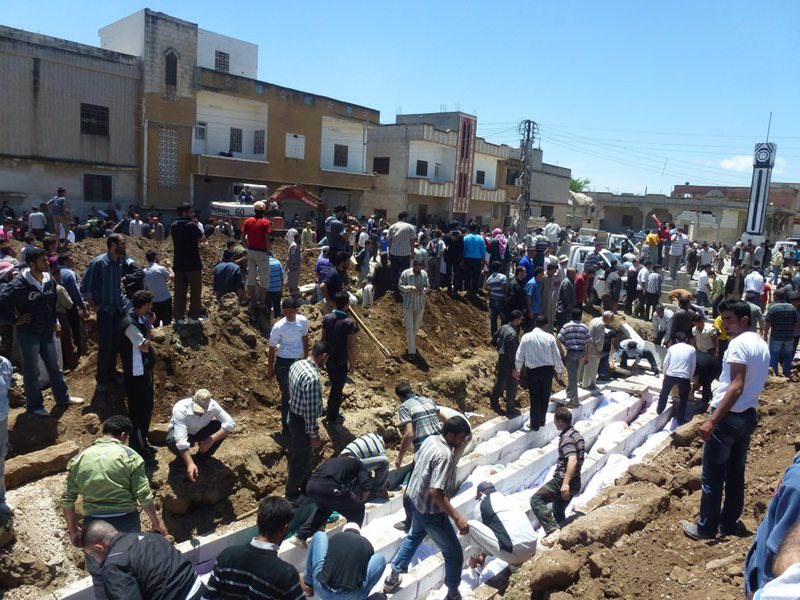 Civilians who were killed by Assad regime forces in city of Homs (AA Photo)
by Anadolu Agency May 05, 2015 12:00 am
At least 499 civilians were killed, including 110 children and 79 women, in 51 massacres that took place in April, the Syrian Network for Human Rights said in a report released on Tuesday.

The London-based NGO, which opposes the Assad regime, said that Syrian army forces committed 50 massacres that mostly took place in Idlib in the northern part of the country and opposition forces committed one massacre "by mistake."

The network defines an attack in which at least five people are killed, as a massacre.

According to the report, regime forces committed 19 massacres in Idlib, 11 in Aleppo, seven in Deraa, four each in Rif Dimashq and Hama, three in Homs and one massacre each in Deir al-Zour, Raqqa and Hasakah.

Meanwhile, opposition forces committed a massacre when they randomly shelled al-Salamiya town in Hama province. Seven civilians were killed, including two children, and 18 people were wounded.

Syria's civil war, now in its fifth year, has killed more than 220,000 people and forced almost four million to flee the country.