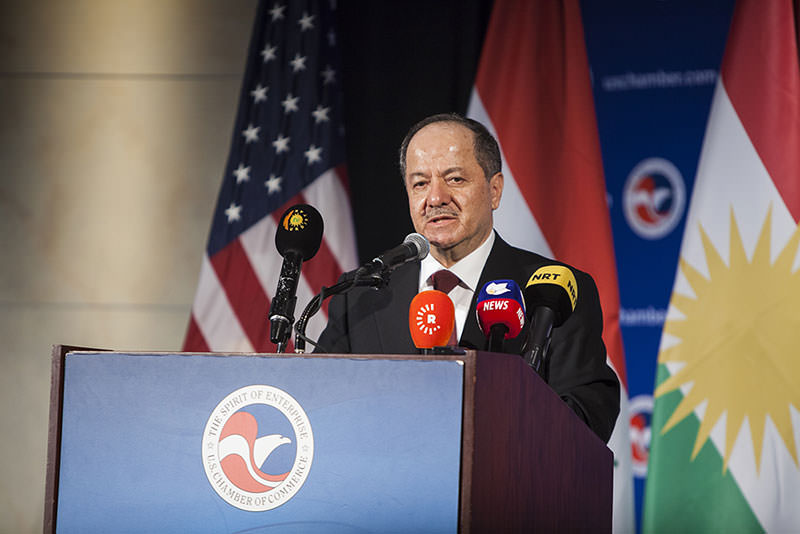 The United States repeated its call for Iraq to remain as a unified, federal state amid Kurdistan Regional Government leader Barzani’s meeting with U.S. President Obama and Vice President Joe Biden for talks

U.S. President Barack Obama met the head of Iraqi Kurdistan Regional Government (KRG) Masoud Barzani, at the White House on Tuesday amid sensitivities over the KRG's demand for independence. With Washington still backing a "unified" Iraq, KRG Barzani asked for U.S. support for his government in order to effectively fight against the Islamic State and al-Sham (ISIS). Tuesday's meeting came as Congress debated whether to use some money destined for the Iraqi army to send weapons directly to Arab Sunnis and Kurds.

"It continues to be the view of the United States that a unified Iraq that's governed in an inclusive way is clearly in the best interest of Iraq's diverse population," said White House spokesman Josh Earnest. The White House released a readout of the leaders' meeting saying the fight against ISIS was the main topic of discussion.

Dating back to June 2014, the U.S. Secretary of State John Kerry remained committed to a unified Iraq, while urging the KRG leader to not seek self-rule and instead help to form a unified government in Iraq. Barzani's last visit to Washington was in April 2012.

Barzani's week-long visit to Washington has been discussed in the media as a diplomatic trip to convince the U.S. to directly provide arms to the Kurds rather than going through the Iraqi central government. "It's true that Kurdistan faced a lot of challenges, especially in confronting the most brutal terrorist organization of ISIS," Barzani said through his head of foreign relations, Felah Mustafa Bakeer, who translated his remarks. He said with the support of the U.S.-led coalition, peshmerga forces have managed to change the situation on the ground.

"The initiative is now in the hands of the peshmerga forces, we have been able to clear a land of more than 20,000 square kilometers [from ISIS]," he said. "Peshmerga were able to destroy the myth of ISIS being an invincible force." The Kurdish president also said the Kurdistan region has hosted more than 1.5 million displaced persons from Iraq and refugees from Syria, despite economic challenges. "I would like to assure you that Kurdistan will remain a safe haven for all those who flee violence," he said. "It will remain the beacon of all and also the land of tolerance regardless of national, ethnic, religious and ethnic background." He also urged U.S. companies to do business in the region while thanking those already doing business there.

The success of peshmerga forces in the Kurdish region against ISIS militants since June 2014, when the militant group grabbed large swaths of territory in Iraq, has fueled a desire for independence by the autonomous region. But the U.S. has resisted the idea of independence and declined to provide military assistance directly to the Kurds while many European powers have supplied aid. The United Kingdom, part of the U.S.-led international coalition, stated that it will continue to support peshmerga forces militarily, as Britain's Chief of General Staff David Richards said during a visit to the northern Iraqi city of Irbil in late April. "I hope the same thing will be happen in other regions of Iraq," he said. "Our military aid will go on. We will provide all kinds of support to the peshmerga forces in all steps," he added.

A U.S.-led coalition has carried out more than 3,000 air strikes over Iraq since September in a bid to dislodge the ISIS militants in Iraq and Syria. On the ground, battle lines have been drawn in Anbar province and the northern city of Mosul, where Kurdish fighters are likely to play a key role in a looming offensive. The city, a short distance from the Kurdish capital Irbil, holds special significance for the Islamic State militants. It was there that ISIS leader Abu Bakr al-Baghdadi proclaimed his "caliphate" straddling Iraq and Syria. Some 4,000-6,000 Iraqis, many of whom fled the ISIS capture of Mosul, are now being trained in Iraqi Kurdistan for the upcoming battle to retake the city. President Obama "commended the bravery of the Kurdish peshmerga [forces]," according to a statement released by the White House.