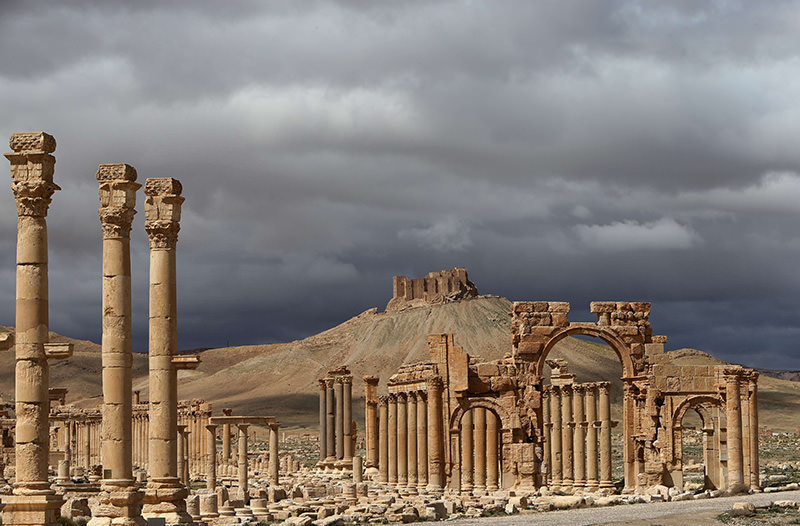 | AFP Photo
by Daily Sabah with DPA May 15, 2015 12:00 am
The self-proclaimed Islamic State of Iraq and al-Sham (ISIS) is threatening to capture almost 2,000-year-old ruins of ancient Syrian city of Palmyra with concern growing for the ancient ruins dedicated to Semitic gods.

The extremists have already blown up priceless artefacts in Iraq, including the 3,000-year-old Assyrian city of Nimrud, and posted videos online boasting of it.

The militant group sees these sites polytheistic and demands they must be destroyed.

Overlooked by a hilltop castle outside Palmyra, lines of pillars stretch across the sand, marking streets once trodden by desert caravans.

The main colonnade leads to a fortified enclosure, which contains the temple, with its richly carved sanctuary, dedicated to the god Baal.

Off to the right, three-storey towers dot the desert landscape. When the small town was a wealthy trading centre two millennia ago, nobles had their tombs built there.

"Palmyra contains the monumental ruins of a great city that was one of the most important cultural centres of the ancient world," according to UNESCO, the UN's cultural body.

The architecture at the historic site, which contains several major buildings, is a mix of Graeco-Roman, Persian and local influences. The city was once at the crossroads of a major trade route in the ancient world, at times falling under the rule of Rome.

The modern city next to the ancient sites, also known as Tadmur, saw anti-government protests at the start of the Syrian uprising in 2011.

In the following two years, the area was the scene of military activity as the civil war intensified. There have been reports of damage to some of the temples from shelling and extensive looting.
Last Update: May 15, 2015 3:25 pm
RELATED TOPICS