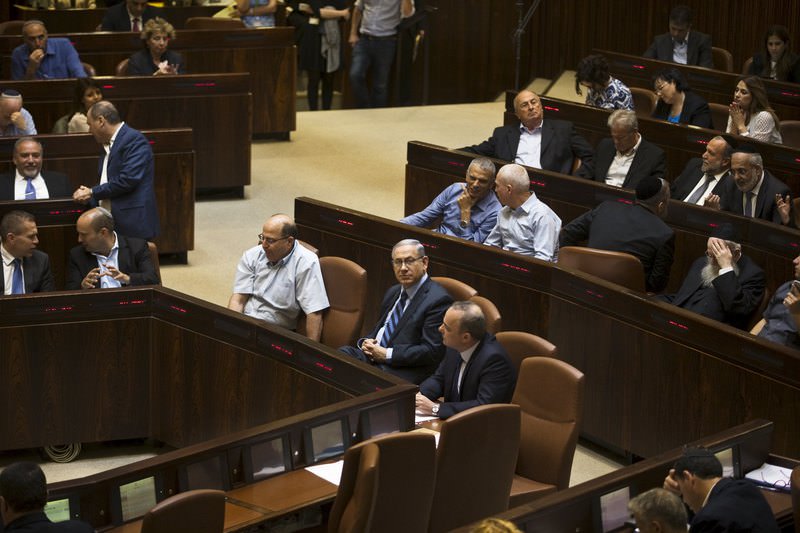 by May 15, 2015 12:00 am
The Israeli parliament approved Prime Minister Benjamin Netanyahu's new rightwing government in a vote of confidence late on Thursday that his coalition won by a razor-thin majority.

Netanyahu's new administration marks a shift to the right and looks likely to complicate Israel's already damaged relationship with the Palestinians and further strain ties with the international community.

After two months of coalition horsetrading, Thursday's session was delayed for another two hours to give Netanyahu more time to placate senior members of his party who were dissatisfied by the portfolios they received, with members of the opposition calling the premier's conduct "a farce."

"We will safeguard our security and strive for peace," Netanyahu said in a speech ahead of the vote, which was interrupted by loud laughter from the opposition and heckling from Arab Israeli lawmakers, three of whom were ejected.

Netanyahu stressed the need to change the system of governance to increase Israel's political stability and implied he would seek to expand his narrow coalition.

"No decent leader would join this circus that you've formed at the last moment with barely a majority for the sole purpose of perpetuating your regime," Herzog said.

The coalition was finally approved by a vote of 61-59.

"I determine the government has won the confidence of the Knesset. Congratulations," Knesset speaker Yuli Edelstein told the parliament, proceeding to swear in the new ministers.

Netanyahu's lineup is dominated by rightwing and religious parties and commands a slender majority of 61 of the parliament's 120 seats, with commentators warning it was vulnerable to the slightest head cold or whim of a disgruntled MP.

The five-party alliance was built over weeks of intensive negotiations which saw him forced to hand out senior ministerial portfolios to coalition partners in a move which has fostered resentment in his own Likud party.

On the eve of the March 17 election, Netanyahu triggered a diplomatic backlash by promising there would be no Palestinian state on his watch.

Although he has since sought to backtrack, reviving the peace process is unlikely to be a priority for his new cabinet, which features several ministers bent on expanding settlement construction on land that the Palestinians want for a future state.

Likud members were handed portfolios in talks with Netanyahu that lasted into the Thursday parliamentary session.

Defence Minister Moshe Yaalon was to keep his portfolio, as was Yisrael Katz, who has served as transportation minister since Likud won the 2009 election.

Katz will also receive the intelligence portfolio, which was formerly held by Yuval Steinitz, who will become energy minister and also continue to coordinate Israel's position on Iran and its nuclear programme.

Silvan Shalom received the interior ministry at the last moment.

Netanyahu confidant Ofir Akunis will be a junior minister in the ministry of communications, which will be headed by the prime minister himself, a party spokesman said.

Benny Begin will be a minister without a portfolio.

And Gila Gamliel was named minister of pensioner affairs.

Gilad Erdan, the highest ranking Likud member after Netanyahu, did not receive a portfolio after refusing the premier's proposal to be internal security minister.

Haim Katz was named welfare minister, and Tzipi Hotovely was appointed deputy foreign minister, with Netanyahu keeping the portfolio for himself and Hotovely, who has called to annex the West Bank and make Palestinians Israeli citizens.

Deri was imprisoned in 2000 for two years for corruption and breach of trust, felonies he committed when he was interior minister.

The coalition groups Likud, which won 30 seats in the election, with the centre-right Kulanu (10 seats), Jewish Home (eight) and the two ultra-Orthodox parties, Shas (seven) and United Torah Judaism (six).
Last Update: May 15, 2015 11:07 am
RELATED TOPICS