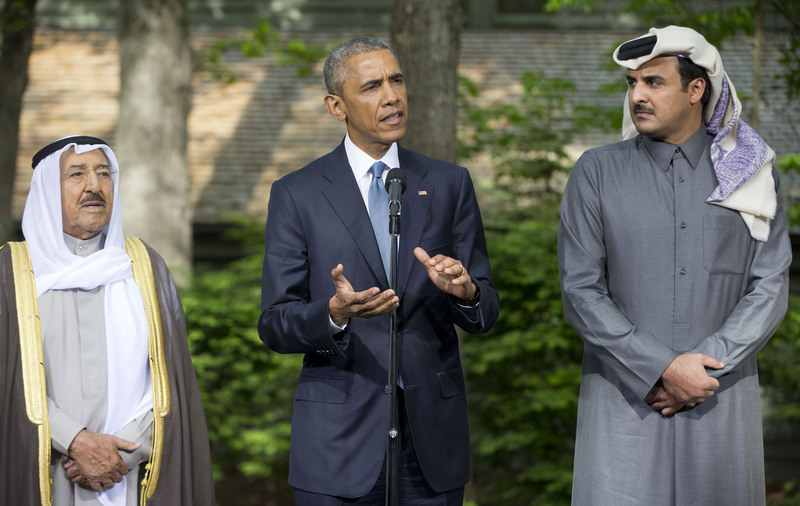 by Associated Press May 15, 2015 12:00 am
President Barack Obama reassured anxious Persian Gulf nations on Thursday that the United States is committed to helping protect their security, including the potential use of military force, in a time of "extraordinary changes and some great challenges."

He offered assurances that an international nuclear agreement with Iran would not leave the nations of the Gulf Cooperation Council more vulnerable.

"I was very explicit ... that the United States will stand by our GCC partners against external attack," Obama pledged at the conclusion of a summit with leaders of the six-nation council.

He expressed his hope that their cooperation would help achieve "the kind of peace and good neighborliness with Iran that I think so many of the countries here seek."

Obama and the Arab leaders met in a rare summit at Camp David, the presidential retreat in Maryland's Catoctin mountains.

The leaders issued a joint statement saying that in the event of aggression, the U.S. stood ready to work with the Arab nations "to determine urgently what action may be appropriate, using the means at our collective disposal, including the potential use of military force, for the defense of our GCC partners."

While the U.S. has long provided military support to partners in the Gulf, the joint statement pledged new cooperation on counterterrorism, maritime security, cybersecurity and ballistic missile defense, among other things.

Obama's separate negotiations in recent months to curb Iran's nuclear program in exchange for sanctions relief have strained relations with many of America's traditional partners in the region. Gulf states fear that if Iran gets an influx of money when sanctions are lifted, it will embolden what they see as Tehran's aggression in the region.

Saudi Foreign Minister Adel al-Jubeir called Thursday a productive day. He said the Arab leaders were "assured that the objective is to deny Iran the ability to obtain a nuclear weapon" and that all pathways to such a weapon would be cut off. He added that it was too early to know if a final nuclear agreement would be acceptable, saying, "We don't know if the Iranians will accept the terms they need to accept."

As the leaders gathered, an Iranian naval patrol boat fired on a Singapore-flagged commercial ship in the Persian Gulf. A U.S. official said it was an apparent attempt to disable the ship over a financial dispute involving damage to an Iranian oil platform.

The incident took place a bit south of the island of Abu Musa just inside the Gulf, according to the U.S. official, who was not authorized to discuss details by name. The White House said no Americans were involved in the incident.

Rhodes said that while the incident did not come up in Thursday's discussions, it was "exactly the type of challenge" the Gulf nations are focused on.

Al-Jubeir, for his part, said, "The Iranians should not be allowed to get away with it. ... For whatever reason they're doing it, it's got to stop."

As the leaders gathered around a large table in the Laurel lodge, the most notable absence was Saudi King Salman. On Sunday, Saudi Arabia announced that the king was skipping the summit, two days after the White House said he was coming.

The White House and Saudi officials insisted the king was not snubbing Obama. But there are indisputable signs of strain in the long relationship between the U.S. and Saudi Arabia, driven not only by Obama's Iran overtures but also the rise of ISIS militants and a lessening U.S. dependency on Saudi oil.

The Gulf summit comes as the U.S. and five other nations work to reach an agreement with Iran by the end of June. The White House says a nuclear accord could clear the way for more productive discussions with Iran about its reputed terror links.

The U.S. has criticized Iran's support for Hezbollah, as well as attacks carried out by Iran's Quds Force. In 2011, the Obama administration accused Iran of plotting to kill the Saudi ambassador to the United States in Washington.

The Saudis are also particularly concerned about the situation in Yemen, where Houthi rebels with ties with Iran have ousted the U.S.- and Saudi-backed leader.

For more than a month, a Saudi-led coalition has tried to push back the Houthis with a bombing campaign. On Tuesday, a five-day humanitarian cease-fire went into effect, though the pause in fighting was already at risk. A jet fighter from the Saudi coalition on Wednesday struck a military convoy belonging to Shiite rebels and their allies in southern Yemen.
Last Update: May 15, 2015 5:18 pm
RELATED TOPICS