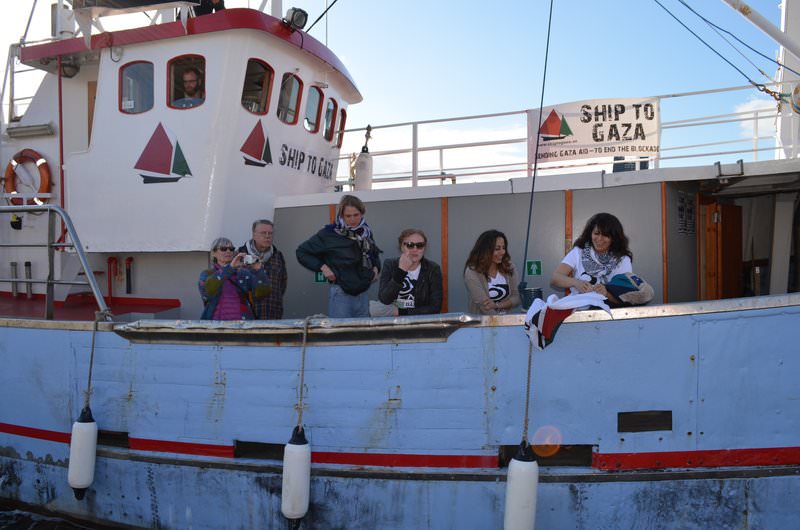 | AA Photo
by Daily Sabah with Agencies May 16, 2015 12:00 am
A Swedish trawler named Marianne of Gothenburg, which sailed from its home port in Sweden on Sunday and stopped at ports in Helsingborg, Malmö and Copenhagen, continued on its way to Gaza on Saturday to break Israel's naval blockade on the Gaza Strip.

Marianne will stop at various ports in different cities to serve as a focus for demonstrations and manifestations against the blockade with the participation of different artists and politicians.

Dubbed as "Sweden's Mavi Marmara", Marianne is carrying a "limited cargo of, among other things, solar cell panels and medical equipment" for Gaza, according to a statement by the Ship to Gaza campaign.

Marianne will join other ships to form "Freedom Flotilla III", a peaceful, nonviolent action to break the illegal and inhumane blockade of the Gaza Strip.

Israel has blockaded the Gaza Strip since 2006, depriving the territory's roughly 1.8 million inhabitants of their most basic needs.

In May 2010, Israel raided Turkey's Mavi Marmara ferry in international waters, a ship in a "Gaza Freedom Flotilla" carrying humanitarian aid and construction materials for Palestinians in the Gaza Strip, and killed nine Turkish nationals-and a U.S. citizen of Turkish descent.

The event sparked international outrage and led to a deterioration of Turkish-Israeli ties.