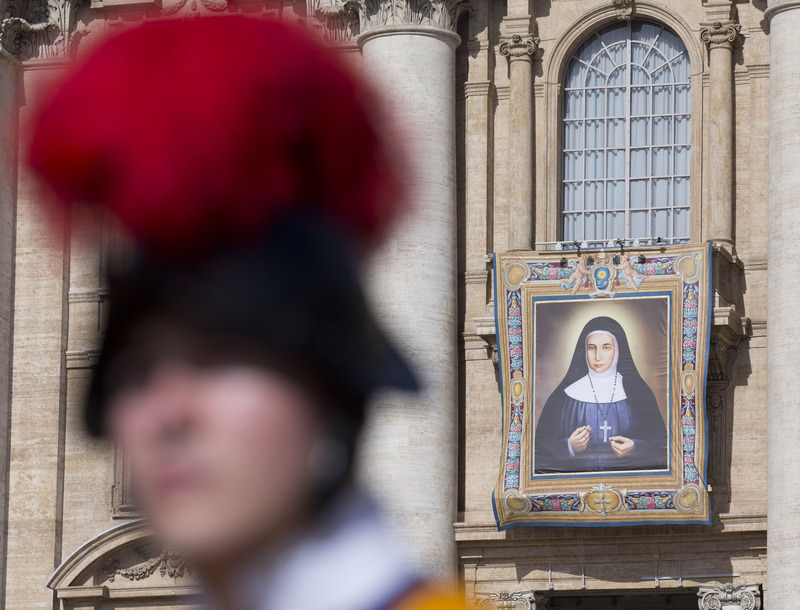 by Daily Sabah with Wires May 17, 2015 12:00 am
Pope Francis canonized two nuns from what was 19th-century Palestine on Sunday in hope of encouraging Christians across the Middle East who are facing a wave of persecution from terrorists.

Sisters Mariam Bawardy and Marie Alphonsine Ghattas were among four nuns who were made saints Sunday at a Mass in a sun-soaked St. Peter's Square. Palestinian President Mahmoud Abbas and an estimated 2,000 pilgrims from the region, some waving Palestinian flags, were on hand for the canonization of the first saints from Palestine since the early years of Christianity.

Church officials are holding up Bawardy and Ghattas as a sign of hope and encouragement for Christians across the Mideast at a time when violent persecution and discrimination have driven many Christians from the region of Christ's birth.

They were canonized alongside two other nuns, Saints Jeanne Emilie de Villeneuve from France and Maria Cristina of the Immaculate Conception from Italy.

"Inspired by their example of mercy, charity and reconciliation, may the Christians of these lands look with hope to the future, following the path of solidarity and fraternal coexistence," Francis said of the women at the end of the Mass.

Bawardy was a mystic born in 1843 in the village of Ibilin in what is now the Galilee region of northern Israel. She is said to have received the "stigmata" - bleeding wounds like those that Jesus Christ suffered on the cross - and died at the age of 33 in the West Bank town of Bethlehem, where she founded a Carmelite order monastery that still exists.

Ghattas, born in Jerusalem in 1847, opened girls' schools, fought female illiteracy, and co-founded the Congregation of the Sisters of the Rosary. The order today boasts dozens of centers all over the Middle East, from Egypt to Syria, that operate kindergartens, homes for the elderly, medical clinics and guest houses.

In his homily, Francis praised Bawardy as having been "a means of encounter and fellowship with the Muslim world," while Ghattas "shows us the importance of becoming responsible for one another, of living lives of service to one another."

"Their luminous example challenges us in our lives as Christians," he said.
The canonization was celebrated in the Holy Land as well as by Palestinians in Rome. Bassam Abbas, a Palestinian-born doctor who has lived in Italy for 35 years, traveled from Civitavecchia, northwest of Rome, for the event with his wife and three children.

"We are proud of this event," Abbas said outside St. Peter's Square as he waved a giant Palestinian flag. "We want peace for Palestine, peace which transcends religion."

In addition to the Palestinian delegation on hand for the Mass, Israel sent a delegation headed by its ambassador to the Holy See, while France, Italy and Jordan also sent official delegations.
Last Update: May 18, 2015 12:33 am
RELATED TOPICS