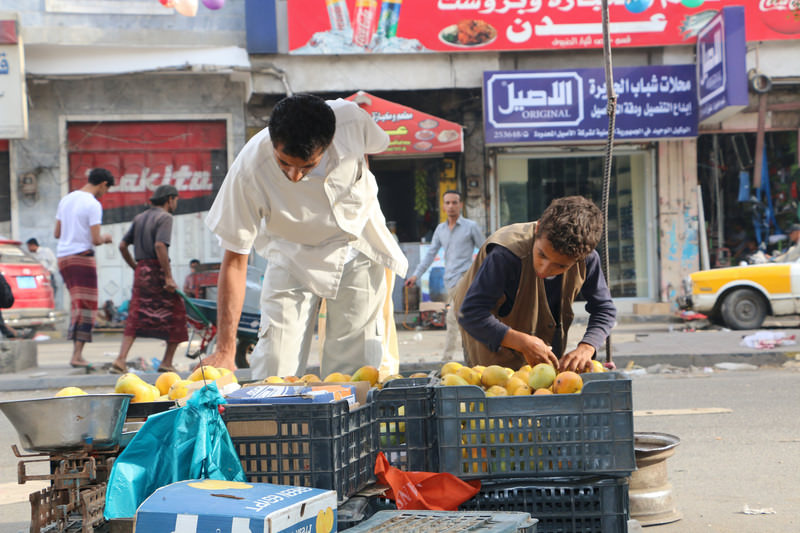 by Daily Sabah with AP May 17, 2015 12:00 am
Saudi-led coalition airstrikes targeting Shiite rebels have resumed in the southern port city of Aden after the end of a five-day humanitarian ceasefire, Yemeni security officials and witnesses said early Monday.

The cease-fire hadn't halted all fighting in Yemen between the rebels, known as Houthis, and those opposing them.

Earlier Sunday, hundreds of Yemeni politicians and tribal leaders began talks in Saudi Arabia on the future of their war-torn country, though the Houthis were not taking part.

The Houthis have rejected the main aim of the three-day talks the restoration of Yemen's exiled president and the location of the negotiations in Saudi Arabia. The absence of the Houthis means the national dialogue is unlikely to end the violence, which saw the rebels seize the capital, Sanaa, in September and ultimately force President Abed Rabbo Mansour Hadi into exile.

The U.N. envoy to Yemen, Ismail Ould Cheikh Ahmed, opened the meeting in Riyadh by calling on all parties to ensure that the shaky cease-fire leads to a lasting truce.

"I call on all parties to refrain from any action that disturbs the peace of airports, main areas and the infrastructure of transport," said Ahmed, who delivered the speech on behalf of U.N. Secretary-General Ban Ki-moon.

Since late March, Saudi Arabia has led airstrikes against the Houthis and allied military units loyal to former President Ali Abdullah Saleh. The air campaign is aimed at weakening the Houthis and restoring Hadi, who fled the country in March in the face of a rebel advance.

"This conference taking place today is in support of politics and community, and rejects the coup," Hadi told the gathering.
He urged a return to the political road map through which Saleh stepped down after more than three decades in power following a 2011 Arab Spring-inspired uprising. Saleh's ouster and the road map was backed and overseen by the six-nation Gulf Cooperation Council, which is headquartered in Saudi Arabia, as well as the U.N. and the U.S.

Among those taking part in the conference are members of Saleh's former ruling party.

Yemen's conflict has killed more than 1,400 people many of them civilians since March 19, according to the U.N. The country of some 25 million people has endured shortages of food, water, medicine and electricity as a result of a Saudi-led blockade. Humanitarian organizations had been scrambling to distribute aid before the end of the truce.

That includes an Iranian cargo ship carrying humanitarian aid en route to Yemen. Iranian state television quoted Nasser Charkhsaz, the head of the Iranian Red Crescent's Relief and Rescue Organization, as saying that the ship is currently sailing in international waters near Oman's Salalah port and will arrive at the Bab el-Mandeb strait between Yemen and Djibouti and Eritrea in two days.

According to the report, the ship is scheduled to reach Yemen's port city of Hodeida by Thursday if plans go smoothly.
Western countries accuse Shiite power Iran of backing the Houthis military, something Iran and the rebels deny.

Meanwhile, a suspected U.S. drone strike hit a car carrying a group of people believed to be al-Qaida militants, Yemeni security officials said. The strike was in Shabwa province, where the militant group has sent reinforcements. The officials spoke on condition of anonymity because they were not authorized to speak to reporters.
Last Update: May 18, 2015 2:50 am
RELATED TOPICS