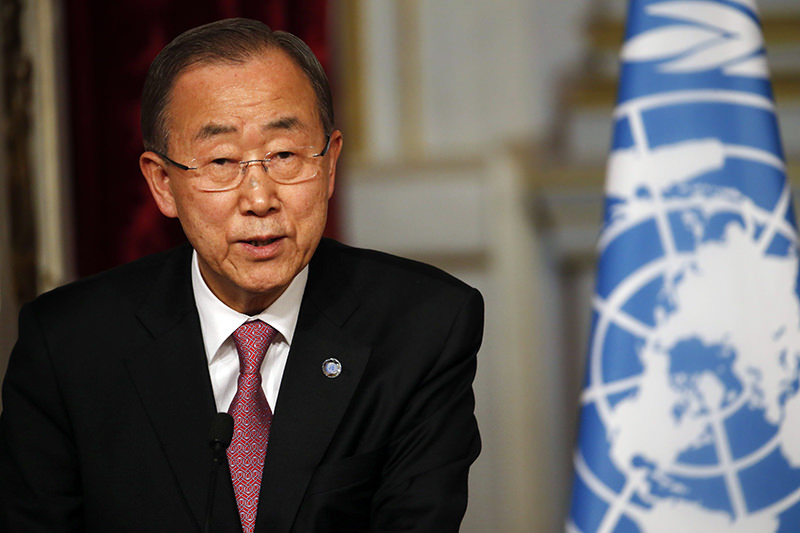 | AFP Photo
by Anadolu Agency May 17, 2015 12:00 am
UN Secretary-General Ban Ki-moon and the United States expressed concern about death sentences sought against Egypt's first democratically-elected President Mohamed Morsi and more than 100 others on Saturday.

A US State Department official on Sunday said: "We have consistently spoken out against the practice of mass trials and sentences, which are conducted in a manner that is inconsistent with Egypt's international obligations and the rule of law." The official noted that they were preliminary sentences and added: "We continue to stress the need for due process and individualized judicial processes for all Egyptians in the interests of justice."

Ban Ki-Moon also urged authorities to avoid steps that could undermine peace, stability and the rule of law in the region, his office told Anadolu Agency in a statement.

"He reaffirms the United Nations' position against capital punishment," the statement added.

A court pronounced death sentences on Morsi and 121 other people on jailbreak charges on Saturday and sent a notice to the Grand Mufti, Egypt's highest religious authority, to give his opinion on the matter.

The opinion of the mufti, however, is non-binding to the court, but Egyptian law makes it necessary for judges to seek a religious point of view on any death sentence.

The potential verdict is open to appeal.

"The Secretary-General understands that the verdict is still subject to an appeal. He will continue to monitor the process very closely," the UN statement said.

Morsi and his co-defendants insist the charges against them are politically motivated.

The other defendants include Muslim Brotherhood supreme leader Mohamed Badie and his deputy Khairat al-Shater, along with several other top leaders of the movement.

Morsi was ousted by the military in July 2013 after just one year in office, following protests against his presidency.

Since his removal, Egyptian authorities have launched a relentless crackdown on dissent that has largely targeted Morsi's supporters, leaving hundreds dead and thousands behind bars.