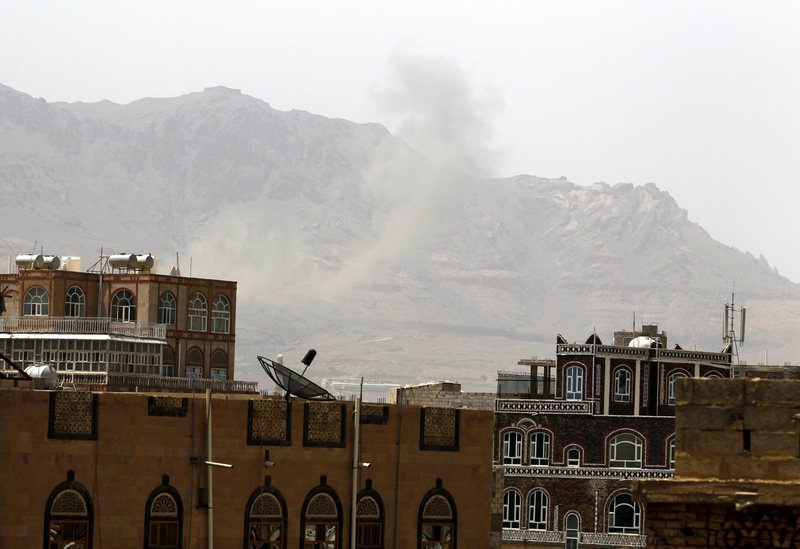 The first strikes came early in the morning raining on Faj Attan missile base in the south-west of the rebel-held city, said residents.

The planes returned later in the day, striking the Jabal Nuqum base east of the city, witnesses said.

There were no immediate reports of casualties. Locals said many people had already left residential areas near Jabal Nuqum after a raid on May 12, which killed 40 people, according to health officials.

A raid on Faj Attan in April also killed an estimated 40 people, mainly civilians, when a blast sent debris and missiles flying through nearby streets.

Airstrikes were also reported in the southern province of al-Dhali', where southern Yemeni separatist fighters have been engaged in fierce clashes with mainly Shiite Houthis and their allied military units.

Saudi Arabia and a coalition of mainly Sunni Arab allies launched air raids against the Houthis and army units loyal to former president Ali Abdullah Saleh in late March after they advanced on President Abd Rabu Mansour Hadi's temporary capital in Aden, forcing him to flee the country.

The coalition resumed airstrikes on Monday with both sides accusing the other of failing to abide by the ceasefire.

The United Nations had called for the ceasefire to be extended to allow more humanitarian aid deliveries. During the truce, 416,543 people across the poverty-stricken country received food aid.

The conflict has caused more than 545,000 people to flee their homes, the UN refugee agency said.

Between the end of March and mid-May, 1,849 people were killed and 7,349 wounded in the fighting, a spokesman for the UN Office for the Coordination of Humanitarian Affairs said in Geneva.
Last Update: May 22, 2015 12:01 am
RELATED TOPICS