UN: At least half a million Yemenis displaced as conflict escalates 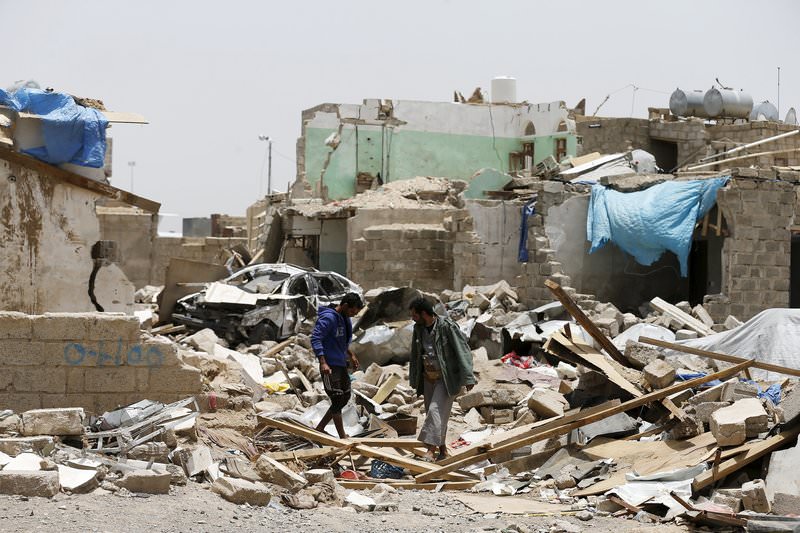 People walk at the site of a Saudi-led air strike that hit a residential area last month near Sanaa airport, May 18, 2015 (Reuters Photo)
by Daily Sabah with AFP May 19, 2015 12:00 am
The United Nations said more than half a million people have been displaced in the conflicted Yemen as the humanitarian crisis still escalates in the country.

Yemen's capital was bombarded on Tuesday for the first time since a five-day ceasefire ended and hopes faded for a political breakthrough in the two-month conflict as a UN-sponsored peace conference originally set for next week was put on hold due to the resumption of fighting.

The UN refugee agency said its assessments on the ground during the five-day ceasefire had "exposed enormous difficulties for thousands of civilians displaced by the conflict".

The World Food Programme said while the pause was "not long enough to reach all those in need", it had managed to deliver food to 400,000 people, just over half the 738,000 it had aimed to help.

After the ceasefire expired on the weekend, the Saudi-led coalition resumed its bombing early Monday with raids on second city Aden, accusing the rebels of violating the truce.

Witnesses said the targets included the Republican Guard missile brigade base in Fajj Attan, south Sanaa, where strikes last month set off a chain of explosions that killed 38 civilians.

A Saudi-led coalition has waged an air war on Iran-backed rebels in Yemen since March in an effort to restore the authority of exiled President Abedrabbo Mansour Hadi, who fled to Riyadh.
Last Update: May 22, 2015 12:00 am
RELATED TOPICS