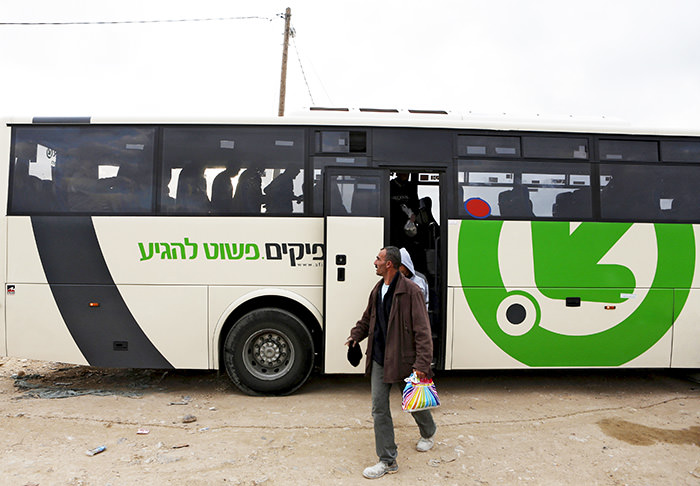 Labourers disembark a Palestinians-only bus before crossing to the West Bank through Israel's Eyal checkpoint, near Qalqilya in this March 4, 2013 (Reuters Photo)
by Mehmet Çelik May 20, 2015 12:00 am

Israeli Minister of Defense Yaalon approved a scheme reflecting an apartheid regime that would prohibit Palestinians from riding the same busses as Israelis, but the scheme was later suspended after drawing harsh criticism

Israeli Prime Minister Benjamin Netanyahu has ordered the suspension of a controversial scheme approved by Minister of Defense Moshe Yaalon that would ban Palestinians in the West Bank who commute to Israel from riding the same buses as Israelis to return home, which would have exacerbated the state's organized apartheid.

"The proposal is unacceptable to the prime minister. He spoke with the defense minister this morning, and it was decided that the proposal will be frozen," an official in Netanyahu's office told Agence France-Presse (AFP).

Israeli public radio reported that Yaalon had agreed to the ban because it would have allowed "better control of the Palestinians and those leaving Israel [as well as] reduce security risks," AFP reported.

The new regulation, which would have worsened the existing oppressive system, received harsh criticism from Israeli opposition leaders. Opposition Zionist Union leader Isaac Herzog condemned the scheme in a message he posted on his Facebook page. "The decision to separate Palestinians and Jews on public transportation is an unnecessary humiliation that is a stain on the state and its citizens," Herzog wrote, criticizing the Yaalon for making a wrong decision in the name of security.

"This is how apartheid looks. There is no better or nicer way to put it. Separate buses for Jews and Palestinians proves that democracy and occupation cannot coexist," said Zahava Gal-On, the leader of Israel's left-wing Meretz Party. Furthermore, Yariv Oppenheimer, the head of Israel's Peace Now, described the scheme as "an ugly and racist policy that has no place in a democratic society," according to The Guardian.

The residents of illegal settlements in occupied territories of the West Bank had previously requested such segregation on public busses as they see Palestinians as a security threat. If the new scheme had been implemented through lobbying by settlers, the already difficult daily life for Palestinians would have been worsened. According to the scheme, Palestinians who enter Israel through the Rayhan, Hala, Eliyahu and Eyal checkpoints will now only be able to return home via the same checkpoints through which they left the West Bank, whereas without the scheme, they are able to return home by riding public busses without new registration at checkpoints. If implemented, going through the checkpoints will mean hours of extra waiting for workers, who mostly work in the construction sector, coming home after a long day.

Netanyahu has been criticized for his aim to further displace Palestinians and implement organized apartheid as he has formed one of the most right-wing coalition governments in Israel's history agreeing on a pact with Naftali Bennett, the leader of the Jewish Home Party, the country's pro-settlement, ultranationalist political force that opposes a two-state solution to the conflict between Israelis and Palestinians. The most controversial appointment in the cabinet was the assignment of Ayelet Shaked as minister of justice, who had called all Palestinians "terrorist enemies" and wished death on Palestinians during Israel's attack on Gaza last summer.

Netanyahu's hard-liner stance has escalated tensions between Israel and its primary allies, the U.S. and the European Union, adding an extra push to the country's already isolated position in the international community. The move to recognize Palestine as a state, even if such moves remain symbolic, has been increasing, with the Vatican most recently recognizing Palestine as a state alongside 135 countries worldwide including many other European states and countries in Africa, Asia and Latin America.

A proposal by the Palestinian Authority was submitted to the United Nations Security Council in December 2014 calling for peace with Israel within a year and an end to the Israeli occupation of Palestinian territories by late 2017. However, the bid failed to garner enough votes to pass, as only eight member states voted in favor of the bid, two voted against it and five abstained. The approval needed the support of nine member states to pass.
Last Update: May 20, 2015 2:28 pm
RELATED TOPICS