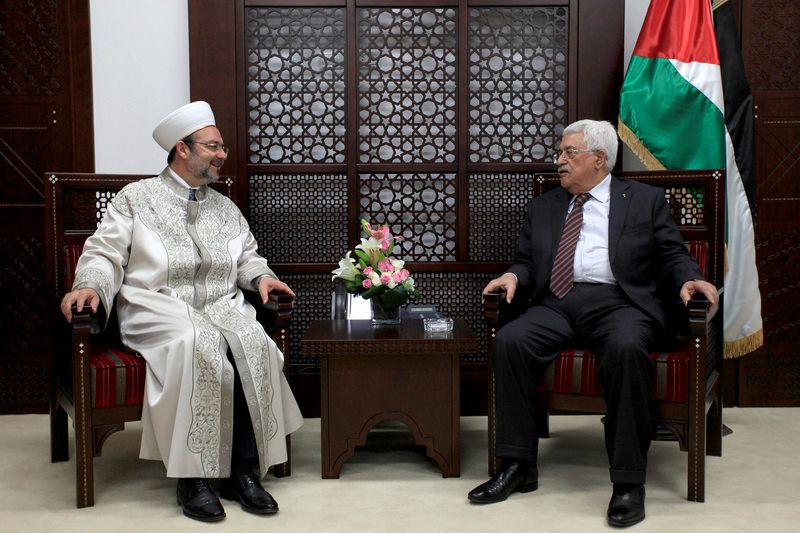 by Daily Sabah with AA May 20, 2015 12:00 am
Palestinian President Mahmoud Abbas hailed on Tuesday a visit by Turkey's top cleric Mehmet Gormez to Palestine, in the face of tough Israeli policies against his people.

He said that visits from Arab and Muslim countries to Palestine and al-Aqsa Mosque in Jerusalem are very important in showing that they stand by the Palestinian people in defiance of the blockade that Israel has placed against Palestinian territories.
"The Ummah [global Muslim community] must fulfill its religious and moral duty toward the holy cities," Abbas said.

President Abbas said that the Palestinian people, who are "connected to their land and Islamic values", are "standing upright" against stringent Israeli policies which aim to "Judaize the city" of Jerusalem and "destroy Islamic identity".

Israel occupied East Jerusalem during the 1967 Middle East War. It later annexed the historic city in 1980, claiming it as the capital of the self-proclaimed Jewish state, a move that was never recognized by the international community.

Israel continues to expand its settlements inside the occupied East Jerusalem, part of West Bank, while maintaining its blockade on the Gaza Strip.

International law views the West Bank and East Jerusalem as occupied territories and considers all Jewish settlements on the land to be illegal.
Last Update: May 20, 2015 1:13 am
RELATED TOPICS