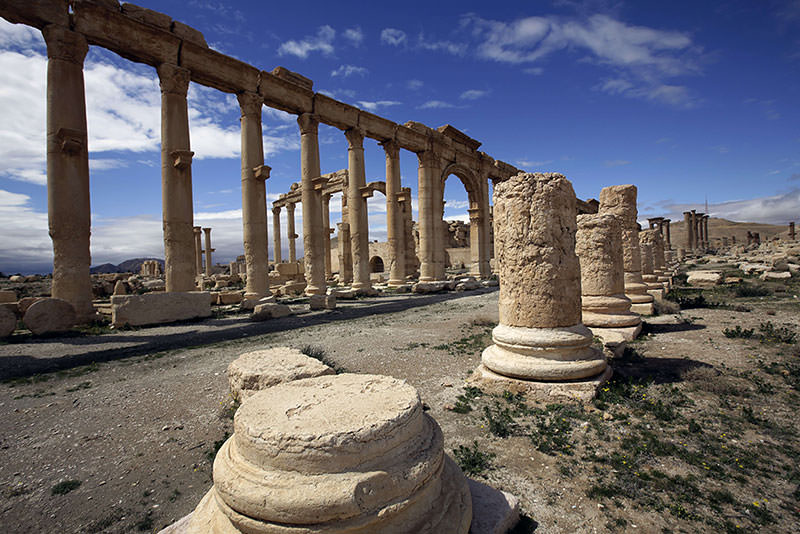 A picture taken on March 14, 2014 shows a partial view of the ancient oasis city of Palmyra, 215 kilometers northeast of Damascus (AFP Photo)
by May 21, 2015 12:00 am
The self-proclaimed Islamic State of Iraq and al-Sham (ISIS) group seized full control of the ancient Syrian city of Palmyra on Thursday, a monitor said, putting the world heritage site at risk of destruction.

The Syrian Observatory for Human Rights said ISIS now controlled half of all territory in the war-torn country.

The Britain-based group said regime troops had pulled back from positions in and around Palmyra, including from an army intelligence outpost, a military airport and a prison which the ISIS militants captured overnight.

"ISIS fighters are in all parts of Tadmur, including near the archeological site," Observatory head Rami Abdel Rahman told AFP, using the Arabic name for the city.

Mohammad Hassan al-Homsi, an activist from Palmyra said: "Regime troops collapsed and withdrew from their positions without resistance."

The capture of the ancient city, which houses colonnaded streets and ruined temples that date back thousands of years, has raised fears that its treasures could be plundered like archeological sites overrun by the militants in Iraq.

Palmyra is also strategically located at the crossroads of key highways leading west to Damascus and Homs, and east to Iraq.

Since ISIS launched its assault on the city on May 13, at least 462 people have been killed in fighting, the Observatory said, including 71 civilians, some of whom were executed by the militants.