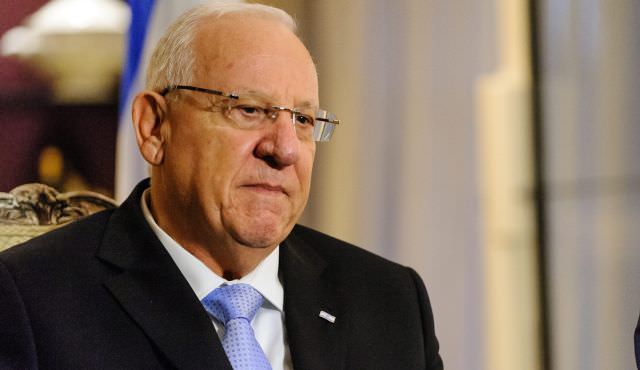 by Anadolu Agency May 21, 2015 12:00 am
Israeli President Reuven Rivlin on Thursday called for "restoring confidence" between Israel and the Palestinians. "Israel should work to restore confidence with the Palestinians by starting with the reconstruction of the Gaza Strip," Rivlin said during a meeting with EU foreign policy chief Federica Mogherini, according to Israeli Radio. He said the Palestinian-Israeli conflict would only end when the two peoples realized the need to live side by side in peace.

Last year, Israel launched a deadly offensive on the Gaza Strip in which more than 2,160 Palestinians were killed and some 11,000 injured.

The onslaught devastated infrastructure across the coastal enclave, which since 2007 has reeled under a crippling Israeli blockade.

Mogherini, for her part, said the EU would continue to support the Middle East peace process.

"My role as EU foreign policy chief is to promote peace by ending the conflict between the two peoples," she said.

Mogherini on Wednesday held a meeting with Israeli Prime Minister Benjamin Netanyahu, in which she confirmed the EU's support for the establishment of a Palestinian state.

Netanyahu, however, insisted that any future Palestinian state must be demilitarized and must recognize Israel as a "Jewish" state.

Palestinian-Israeli peace talks ground to a halt almost one year ago when Israel failed to honor earlier pledges to release a group of Palestinian prisoners.

The roots of the current conflict between Palestinians and Israelis dates back to 1917, when the British government-in the now-famous "Balfour Declaration"-called for the establishment in Palestine of a "national home for the Jewish people."

Israel occupied East Jerusalem and the West Bank during the 1967 Middle East War. It later annexed the holy city in 1980, claiming it as the capital of the self-proclaimed Jewish state in a move never recognized by the international community.

The Ramallah-based Palestinian Authority wants a Palestinian state in the Gaza Strip and West Bank, with East Jerusalem-currently occupied by Israel-as its capital.
Last Update: May 22, 2015 12:32 am
RELATED TOPICS