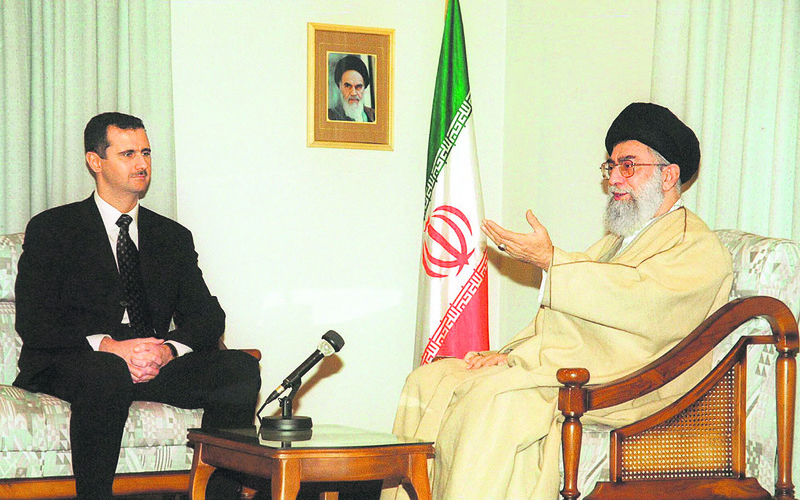 Amid fierce ongoing battles in Syria between rebels and regime troops, Iranian revolutionary guards and Hezbollah, two Syrian refugee women said they had to leave their homes behind after the Iranians arrived

Some Syrian refugees living in Istanbul told Daily Sabah that their homes were seized by Iranian troops who are battling rebel forces. The refugees claimed that they were displaced by the troops and left everything they owned behind. Since the Syrian civil war began in 2011 after peaceful pro-democracy protests were violently suppressed by the regime, the winning side has shifted frequently.

While rebels claim to have made significant gains, the regime and pro-regime militias report that they have repelled the attacks. In the last four years it has often been claimed that the regime was about to collapse due to various reasons. The diverse opposition groups have also been involved in internecine clashes, as the Islamic State of Iraq and al-Sham (ISIS) and the other moderate groups have disagreed over the leadership and the future of the Syrian state.

Ever since 2012, when rebels gained strategic positions both in the north and the south of the country, debates have raged over how to administer Syria after the war, while the involvement of Lebanon's Shiite group, Hezbollah, and the Iranian Revolutionary Guards have been presented as a turning point in the war in favor of the regime.

It is a long-known fact that Iran is involved in the conflict in both Syria and Iraq. It is a fact that the other international and regional actors like the U.S., Russia and Saudi Arabia play a crucial role in the conflicts. However, the thing that makes Iran different is that the country's troops have put their boots on the ground. A Syrian refugee, In'am, who asked for her surname to remain anonymous due to security issues, who left her town near Damascus for Istanbul, said that "We have no chance to go back even after the war ends." She said, "our homes were given to Iranian troops by the regime. They have come to the town, displaced us and have been using our homes, cars and everything." Another woman from a neighboring village, Zahra, who also spoke on the condition of anonymity, also confirmed her words and said "the same thing happened to us. We had to give our homes to them to remain alive." Both of the women said that none of the troops were from Syria nor spoke Arabic.

Iran has helped the Assad regime throughout the war, dispatching thousands of soldiers, mobilizing the Lebanon-based Shiite Hezbollah group and delivering millions of dollars, despite its troubled economy due to international sanctions. BasNews reported that the Iranian government has funded the Syrian regime to the tune of $6 billion since the beginning of the war. A diplomatic source, who spoke on condition of anonymity due to the sensitivity of the subject, was quoted by BasNews as saying that "Iran is demanding concessions from the Syrian government in terms of oil, infrastructure and agriculture to cover the value of its credit and support of the Syrian regime. To date Iran has provided $6 billion in funding and this will increase as the conflict continues." Ali Akbar Velayati, a top aide to Iran's supreme leader, Ayatollah Ali Khamenei, paid an official visit to Damascus last week and pledged Iran's support for the regime. Syria's official news agency SANA reported that Velayati also told the regime officials Iran is extending a credit line to make up for market needs. Velayati also signed several agreements in the fields of electricity, industry, oil and investment. "Iran is determined to continue to stand by Syria and is supporting it with whatever is needed to reinforce the resistance its people are showing in defending the country and fighting terrorism," SANA quoted Velayati as saying. "Rustom Qasemi, head of an Iranian agency tasked with developing bilateral economic relations, visited Assad and said Tehran wanted to shore up Syria economically," Reuters reported.

Iran's support to Syria isn't limited to just economic help as Iran directly sends weapons and even troops. Iran has entered the fight to retake a major Iraqi oil refinery from Islamic State of Iraq and al-Sham (ISIS) militants, contributing small numbers of troops – some operating artillery and other heavy weapons – in support of advancing Iraqi ground forces, U.S. defense officials said. "Two U.S. officials said Iranian forces had taken a significant offensive role in the Beiji operation in recent days, in conjunction with an Iraqi Shiite militia. The officials were not authorized to discuss the matter publicly and spoke on Friday on condition of anonymity," AP reported. Iran had appeared in the process of the re-capture of Tikrit last month as some 30,000 men were involved in the operation to recapture Tikrit, one of ISIS's main hubs since they overran large parts of Iraq 10 months ago. The overt Iranian role and the prominence of Shiite militias in the campaign have raised fears of possible sectarian cleansing should Tikrit, an overwhelmingly Sunni city, fall to government troops. The U.S. and Human Rights Watch (HRW) warned that an offensive to retake control of the Iraqi city of Tikrit must not fuel sectarian tensions. In the end, the militias and Iranian advisers failed to re-capture the city without airstrikes, which were carried out by the U.S.
Last Update: May 25, 2015 2:00 am