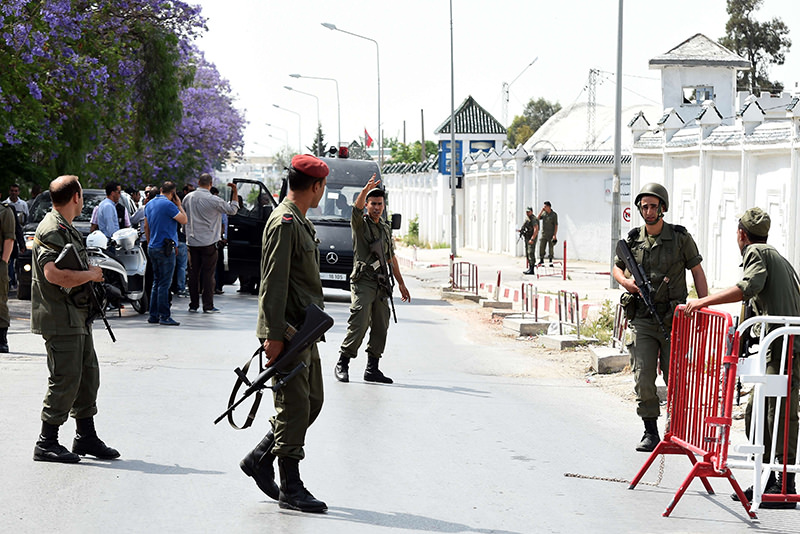 Tunisian soldiers stand guard outside the Bouchoucha army barracks in Tunis on May 25, 2015 after a soldier opened fire at his colleagues. (AP Photo)
by Anadolu Agency May 25, 2015 12:00 am
A Tunisian soldier was killed on Monday after opening fire on several fellow soldiers in an army barracks in capital Tunis, leaving seven of the latter dead, the country's presidency has said.

"Eight troops were killed in the shooting that took place in the Bouchoucha army barracks, including the soldier that opened fire," presidential spokesman Moez Sinaoui told a press briefing in Tunis.

The identity of the shooter, meanwhile, has yet to be announced.

Defense Ministry spokesman Belhassen Oueslati told state radio earlier that the incident should not be considered a "terrorist act".

"A soldier based in the Bouchoucha military barracks in Tunis' Bardo district opened fire on his comrades," he said.

"The situation is currently under control," he added, giving no further details.

Eyewitnesses had told Anadolu Agency earlier that heavy gunfire could be heard near the March 20 Mosque and the Bouchoucha military barracks in the capital's Bardo district, prompting security forces to surround the area and evacuate students from an adjacent school.