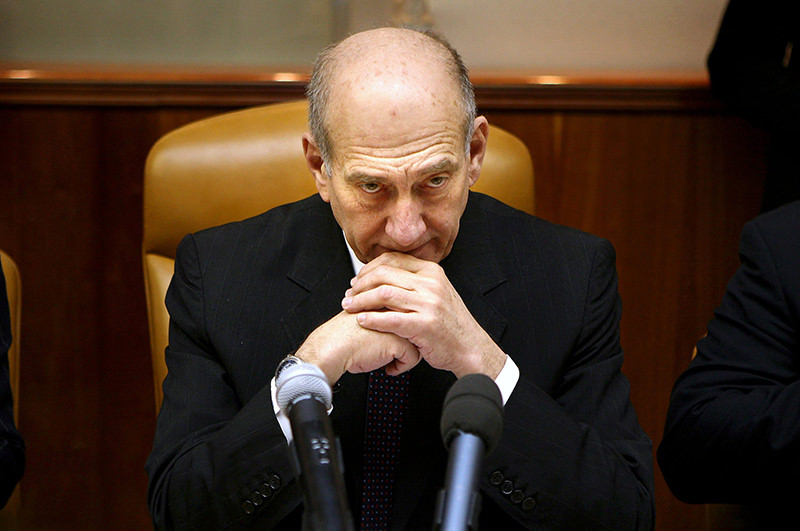 | AP Photo
by Associated Press May 25, 2015 12:00 am
Former Israeli Prime Minister Ehud Olmert was sentenced Monday to eight months in prison for unlawfully accepting money from a U.S. supporter, capping the dramatic downfall of a man who only years earlier led the country and hoped to bring about a historic peace agreement with the Palestinians.

Olmert was convicted in March in a retrial in Jerusalem District Court. The sentencing comes in addition to a six-year prison sentence he received last year in a separate bribery conviction, ensuring the end of the former premier's political career.

Olmert was forced to resign in early 2009 amid the corruption allegations. His departure cleared the way for hard-liner Benjamin Netanyahu's election, and subsequent peace efforts have not succeeded.

Olmert, 69, was acquitted in 2012 of a series of charges that included accepting cash-stuffed envelopes from U.S. businessman Morris Talansky when Olmert was mayor of Jerusalem and a Cabinet minister. Olmert was found to have received about $600,000 from Talansky during his term as mayor, and additional amounts in cash during his term as a Cabinet minister, but a court did not find evidence the money had been used for unlawful personal reasons or illegal campaign financing.

Talansky, an Orthodox Jew from New York's Long Island, had testified the money was spent on expensive cigars, first-class travel and luxury hotels, while insisting he received nothing in return.

The acquittal on the most serious charges at the time was seen as a major victory for Olmert, who denied being corrupt. He was convicted only on a lesser charge of breach of trust for steering job appointments and contracts to clients of a business partner, and it raised hopes for his political comeback.

But Olmert's former office manager and confidant Shula Zaken later became a state's witness, offering diary entries and tape recordings of conversations with Olmert about illicitly receiving cash, leading to a retrial. In the recordings, Olmert is heard telling Zaken not to testify in the first trial so she would not incriminate him.

The judges concluded that Olmert gave Zaken part of the money in exchange for her loyalty, and used the money for his own personal use without reporting it according to law. They convicted him on a serious charge of illicitly receiving money, as well as charges of fraud and breach of trust.