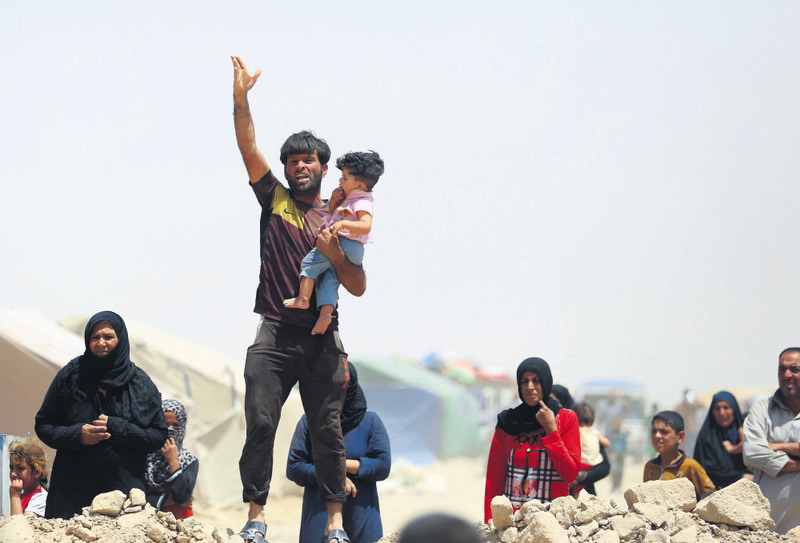 A Ramadi resident fleeing from ISIS shouts at Iraqi officials who refuse to let them leave the outskirts of the city.
by Yusuf Selman İnanç May 25, 2015 12:00 am

Republicans, including Senator John McCain, have heavily criticized the Obama administration for being ‘ineffective' in its fight to stop ISIS, while the U.S. has pointed the finger at the Iraqi army, claiming it suffers from a lack of willingness to fight

The continued procrastination on the Syrian regime and the Islamic State of Iraq and al-Sham (ISIS) by U.S. President Barack Obama, who in 2013 said the use of chemical weapons by the Assad regime was his red line, is increasingly being interpreted by Turkey and much of the international community as indifference to what is happening in the region. As tens of thousands flee from Ramadi after being taken by ISIS, U.S. Republicans joined those criticizing the increasingly confusing U.S. policies.

Despite rumors that the latest rebel advances have weakened the Syrian regime and claims that the Islamic State of Iraq and al-Sham (ISIS) has lost ground, the regime of Syrian President Bashar Assad has stopped rebels in rural parts of Idlib province while ISIS has captured Ramadi in Iraq and Palmyra in Syria. U.S. President Barack Obama has been accused by Turkey and some EU countries, including France, of being reluctant to see the ouster of Assad, who the West says has lost legitimacy. When military intervention in Syria was on the table in 2013 after the use of chemical weapons, which was described as a redline by Obama, the president remained inactive, refusing to launch a military operation, as well as Turkey's demand for a no-fly zone. The Obama administration has been criticized for its policy on Assad and for not helping moderate rebels who lost power allowing al-Qaida-affiliate al-Nusra Front and ISIS to expand their control over Syrian territories, according to Free Syrian Army officials.

Obama faces internal opposition over his policies in the region, especially on ISIS. Obama took over from President George W. Bush's administration's Iraq policy that ended in catastrophe for the U.S. as the country, following the deposal of Saddam Hussein, failed to establish stability and allowed the Iranian-supported government to fuel sectarian hatred. Republican Senator John McCain from Arizona on Sunday attacked Obama for citing climate change as a threat to national security and claimed that it was a tactic to distract attention from the failing fight against ISIS. "There is no strategy, and anybody who says there is, I'd like to hear what it is," McCain said, talking to CBS News. "It certainly is not apparent. Right now we are seeing horrible reports in Palmyra, they are executing people and leaving their bodies in the streets. Meanwhile the president of the United States is saying that the biggest problem we have is climate change," he said. In a commencement address at the U.S. Coast Guard Academy last week Obama said: "I'm here today to say that climate change constitutes a serious threat to global security. An immediate risk to our national security. And make no mistake, it will impact how our military defends our country. And so we need to act, and we need to act now."

The U.S., cooperating with the Iraqi government in the battle against ISIS, blamed the fall of Ramadi on the Iraqi army, which was described as lacking the willpower to fight. On Sunday, U.S. Secretary of Defense Ashton Carter blamed the fall of Ramadi not on the lack of American commitment, but on Iraqi forces, which he said lack the "will to fight."

"What apparently happened is the Iraqi forces just showed no will to fight," Carter told CNN. "They were not outnumbered. In fact, they vastly outnumbered the opposing force. That says to me, and I think to most of us, that we have an issue with the will of the Iraqis to fight [ISIS] and defend themselves." Hakim al-Zamili, the head of Iraq's parliamentary defense and security committee, responded to Carter, calling his comments "unrealistic and baseless." Zamili said the U.S. military was seeking to "throw the blame on somebody else."

"We need to have a robust strategy," McCain said. "We need to have more troops on the ground. We need forward air controllers. … We need to have special forces. We need to have more of those kinds of raids that have had some success," he added. Republican Representative Adam Kinzinger, a former air force pilot and major in the national air guard, also criticized the policy and told CNN: "We're not really engaged in this fight. This is a cancer that's growing in the Middle East. This is now a house on fire in a densely packed neighborhood, where it's going to extend to other places."

While the debates over U.S. policy continue, ISIS poured more fighters into Ramadi on Monday as security forces, Reuters reported. "Ramadi residents said trucks carrying ISIS fighters arrived on Sunday evening before spreading out across the city," a Reuters report said. Local man Abu Saed was quoted by Reuters as saying: "I saw two trucks pull up outside with dozens of fighters carrying arms running quickly into nearby buildings and taking cover." The news agencies also reported that Iranian-backed Shiite militias, whose presence concerns the U.S., have been preparing a major attack to retake the city. Despite the warnings made by the U.S. and several rights groups over that the involvement of the Iranian-backed radical Shiite militias may worsen the already troubled sectarian balance, as it did in the re-capture of Tikrit last month when the city was looted by the militias.

The U.S. refuses to ally with Iran directly over battling ISIS. Obama was also criticized by Iran on Monday. The chief of an elite unit in Iran's Revolutionary Guard accused the U.S. of having "no will" to stop ISIS, local media reported. The comments by Gen. Qassem Soleimani, the head of the Revolutionary Guard's elite Quds force and considered to be the brain behind Iran's martial policy in both Iraq and Syria, was quoted by Iranian daily Javan, which is seen as close to the Revolutionary Guard, as saying that "the U.S. didn't do a damn thing to stop the extremists' advance on Ramadi." Soleimani claimed that only Iran and its allies confront ISIS. "Today, there is nobody in confrontation with ISIS except the Islamic Republic of Iran, as well as nations who are next to Iran or supported by Iran," he said.
Last Update: May 25, 2015 11:03 pm
RELATED TOPICS