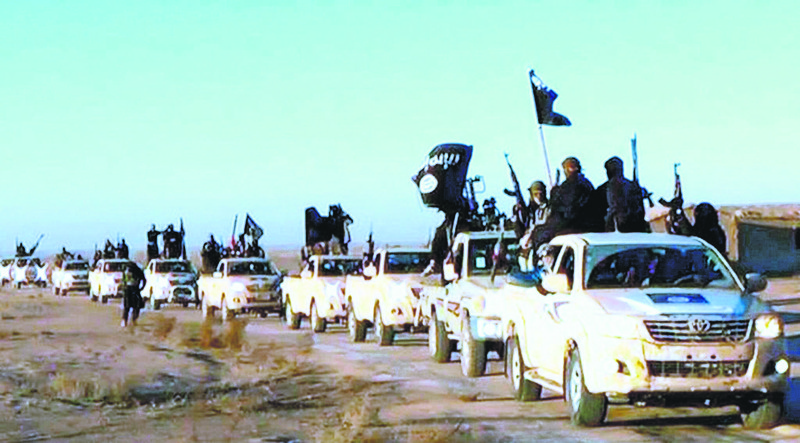 Fighters from al-Qaida's Syrian affiliate Al-Nusra Front drive armed vehicles in the northern Syrian city of Aleppo.
by Daily Sabah May 28, 2015 12:00 am

Abu Mohammad al-Golani, head of the al-Qaida-affiliated Nusra Front, in an interview claimed that the group will not target Alawites or attack the West, but that the group is rather fighting the Syrian regime and its collaborators

The leader of the al-Qaida-affiliated Nusra Front, Abu Mohammad al-Golani, in an interview with Al-Jazeera said that the group will not target Syria's Alawite minority despite their support for Syrian President Bashar Assad. "The battle does not end in Qardaha, the Alawite village and the birthplace of the Assad clan. Our war is not a matter of revenge against the Alawites despite the fact that in Islam they are considered heretics. Our fight is strictly with those who attacked us and murdered our people. Our faith is based on mercy and our noble traditions. We are not murderers. We will not hurt them or target them, the Druze or anyone else." He said that the group's aim is to bring the regime down and claimed that the fall of the Assad regime will not take long. "We will continue our focus on Damascus and on toppling this regime. I assure you, Assad's fall won't take a long time," he said. "We are only here to accomplish one mission, to fight the regime and its agents on the ground, including Hezbollah and others," he added.

He also claimed that al-Nusra Front has no plan to attack the West as al-Qaida did before. "Al-Nusra Front doesn't have any plans or directives to target the West. We received clear orders not to use Syria as a launching pad to attack the U.S. or Europe in order to not sabotage the true mission against the regime. Maybe al-Qaida does that, but not here in Syria," he said. However he warned the U.S. to refrain from attacking al-Nusra Front with their airstrikes. "Our options are open when it comes to targeting the Americans if they will continue their attacks against us in Syria. Everyone has the right to defend themselves," he said. He accused the U.S. and the West of backing the Assad regime and claimed that the Khorasan group, which had been introduced by the U.S. as more dangerous than the Islamic State of Iraq and al-Sham (ISIS), is not real. "The West is targeting al-Nusra because they know we are the real threat to the Assad regime. This is why they came out and said they are only targeting this group that they called Khorasan. There is nothing called Khorasan. The Americans came up with it to deceive the public. They claim that this secret group was set up to target Americans, but this is not right," he said.

He also touched on the issue of their rivalry with the Islamic State of Iraq and al-Sham (ISIS) as the two groups, which were under the same umbrella until ISIS claimed independence in 2013 and rejected Golani's leadership, have been fighting each other in certain areas. However, several reports have also claimed that the two groups were cooperating in some parts of Syria like Yarmouk. Placing ISIS as the main threat to the group, he said: "Assad's forces are fighting us on one end, Hezbollah on another and ISIS on a third front. It is all about their mutual interests."

Al-Qaida's official Syrian branch, al-Nusra Front, emerged as a decisive actor in the war against the Syrian regime when the war started in the middle of 2011 and has been carrying out effective attacks under the leadership of Golani, about whom there is limited information. The organization not fights against regime troops and other groups including ISIS.
Last Update: May 28, 2015 11:38 pm
RELATED TOPICS