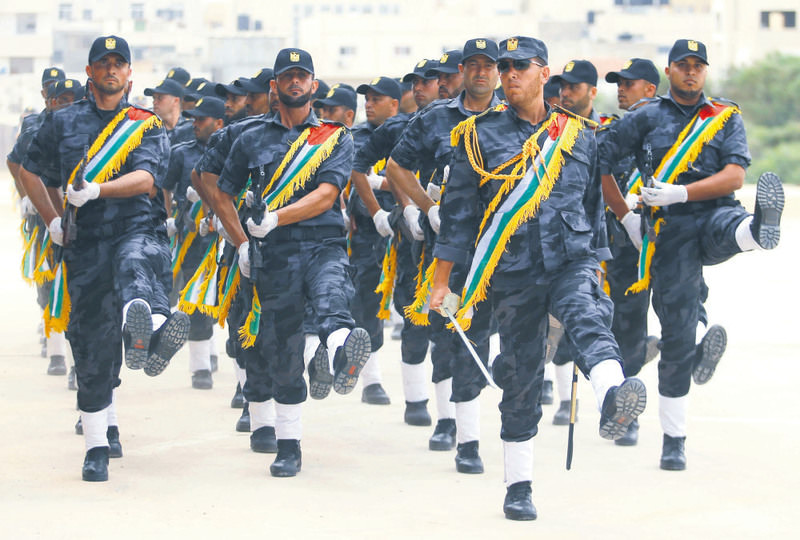 Members of the Palestinian security forces loyal to Hamas march during a military graduation ceremony in Gaza City on May 21.
by Yusuf Selman İnanç May 28, 2015 12:00 am

After Amnesty accused Gaza's ruling movement Hamas of torturing, abducting and executing civilians in Gaza City, which suffers from Israeli aggression and blockade, Hamas claimed the report was politicized and biased

A prominent international watchdog Amnesty released a report on Gaza in which the ruling movement Hamas was accused of abducting, torturing and killing Palestinians during the Israeli attacks last summer that left more than 2,000 deaths. Amnesty International detailed the abuses in a report entitled "Strangling Necks': Abduction, torture and summary killings of Palestinians by Hamas forces during the 2014 Gaza/Israel conflict." According to the London-based human rights group, some 23 Palestinians were shot and killed and dozens more were arrested and tortured by Hamas. "It is absolutely appalling that, while Israeli forces were inflicting massive death and destruction upon the people in Gaza, Hamas forces took the opportunity to ruthlessly settle scores, carrying out a series of unlawful killings and other grave abuses," said Philip Luther, Director of the Middle East and North Africa Program at Amnesty International. "In the chaos of the conflict, the de facto Hamas administration granted its security forces free rein to carry out horrific abuses including against people in its custody. These spine-chilling actions, some of which amount to war crimes, were designed to exact revenge and spread fear across the Gaza Strip," he added. "Many of these unlawful killings were publicly billed as attacks against people assisting Israel during the July and August 2014 conflict as part of an operation, codenamed "Strangling Necks", to target "collaborators". However, in reality, at least 16 of those executed had been in Hamas custody since before the conflict broke out. Many had been awaiting the outcome of their trials when they were taken away from prison and summarily executed," the group said in a statement. "Instead of upholding justice, the Hamas authorities and leadership have continuously encouraged and facilitated these appalling crimes against powerless individuals. Their failure to even condemn the unlawful killings, abduction and torture of perceived suspects leaves them effectively with blood on their hands," said Luther. The watchdog detailed the allegations and gave the profiles of some executed prisoners. "Atta Najjar, a former police officer under the Palestinian Authority who has a mental disability, was serving a 15-year prison term imposed by a military court after he was arrested in 2009 and subsequently convicted of "collaborating" with Israel. On 22 August 2014, he was taken out from the prison and executed," the group said.

The group also previously accused Hamas of war crimes for launching rockets towards Israel. Amnesty also accused Israel of committing war crimes during the Gaza attacks. However, in the latest report, the group did not talk to any official from Hamas and quoted the words of Hamas's political dissidents. A senior Hamas member Yahia Moussa was quoted by Anadolu Agency on Wednesday as saying that "[Amnesty International's] accusations are politicized and biased." Moussa said the report "only serves the purpose of whitewashing Israel and covering up its crimes," which, he said, were committed against the Palestinians in the Gaza Strip during last summer's offensive. Moussa called on the right group to "issue fair reports that could be used as evidence against Israel before international courts."
RELATED TOPICS