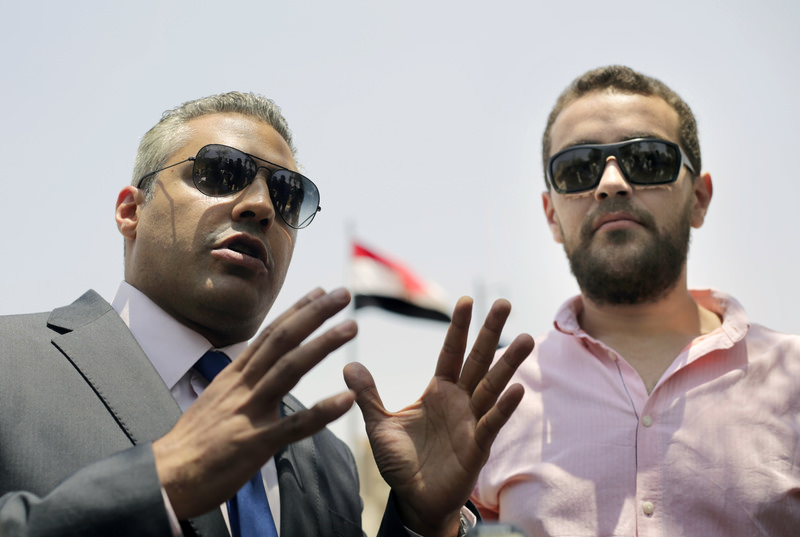 by Jun 01, 2015 12:00 am
A Cairo court on Monday adjourned the trial of three Al Jazeera television journalists for four days after hearing the prosecution's closing argument that their reporting had endangered Egypt's national security.

Australian journalist Peter Greste, who was released in February after 400 days in jail and deported, has not returned for the trial and the presiding judge only mentioned him once when reading out the names of the accused.

Mohamed Fahmy, a naturalised Canadian who gave up his Egyptian citizenship, and Egyptian Baher Mohamed were present to hear the argument that their meetings with members of the outlawed Muslim Brotherhood and use of the word "coup" to describe the army's July 2013 seizure of power had harmed the country.

The three were arrested in December 2013 and originally sentenced to between seven and 10 years in prison on charges including spreading lies to help a terrorist organisation.

Egypt's high court ordered a retrial in January and Fahmy and Mohamed were released on bail in February, shortly after Greste was deported.

The three journalists, whose case prompted an international outcry, were arrested after several months of protests by Muslim Brotherhood supporters against the ousting of Islamist president Mohamed Mursi.

Egyptian authorities accuse Qatar-based Al Jazeera of being a mouthpiece of the Brotherhood, which was outlawed as a terrorist organisation after then army chief Abdel Fattah al-Sisi unseated Mursi following mass protests against his rule.

Greste told Reuters last week he feared he would be found guilty in absentia at the retrial. Egyptian courts usually declare absent defendants guilty as charged and give them the option of a retrial if they turn themselves in.

Separately, a Cairo criminal court sentenced in absentia 29 people, including seven minors, to between five and 10 years in prison for charges including illegal assembly, threatening violence and destroying public property, a judicial source said.

The defendants were arrested after a February 2013 protest at the presidential palace in Cairo, one of many demonstrations for and against Mursi in the months before his ouster.

The court had earlier released the defendants, who will be retried if they are arrested or hand themselves in.