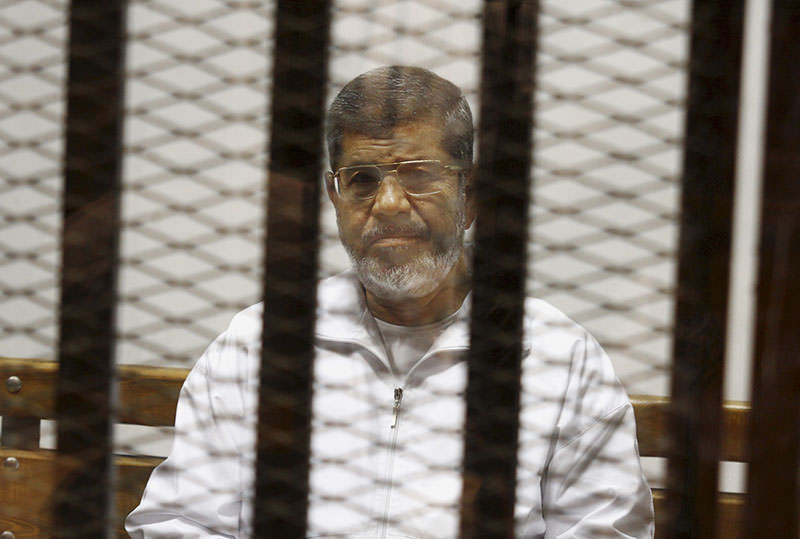 Mohammed Morsi sits in a defendant cage in the Police Academy courthouse in Cairo, Egypt (AP Photo)
by Anadolu Agency Jun 01, 2015 12:00 am
Egypt's first democratically elected president Mohamed Morsi will discover on Tuesday whether the death sentence passed against him last month will be upheld.

Following a non-binding opinion from the grand mufti, Egypt's highest religious authority, a court in Cairo will announce whether the sentence, imposed over a 2011 prison break, is to remain in place. If it is, Morsi will be able to appeal the decision.

Rafet Fude, a law professor at Cairo University, told Anadolu Agency that the court's three judges can decide to follow the grand mufti's recommendation or ignore it. The court can also replace the death sentence with a 25-year prison term.

Mahmud es-Saka, another law professor at the university, said that if the judges decide to follow a recommendation not to execute 63-year-old Morsi, then the court would listen to further arguments from his lawyers.

The court could also adjourn the hearing if the grand mufti's recommendation is not ready in time.

On Monday, El-Ahbar, a semi-official newspaper, said the grand mufti had yet to prepare a report and that Tuesday's hearing could be postponed.

Morsi, who became Egypt's first democratically elected president in 2012 after the ousting of President Hosni Mubarak, received a 20-year prison sentence for organizing attacks on protesters.