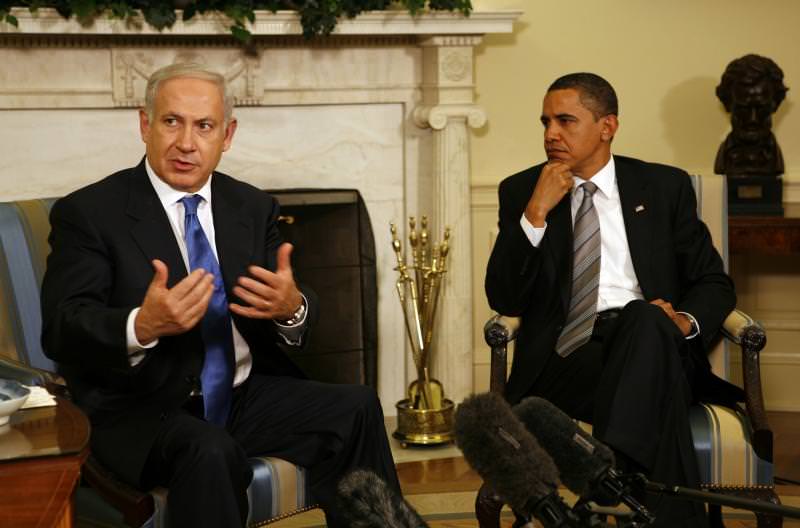 by Daily Sabah with Wires Jun 02, 2015 12:00 am
U.S. President Barack Obama said in an interview Tuesday that Israel risks losing "credibility" over Israeli Prime Minister Benjamin Netanyahu's stance on the creation of a Palestinian state. Obama made the comments to an Israeli television station in response to a question about Netanyahu's comments regarding the establishment of a Palestinian state before and after the March elections.

Netanyahu sparked international concern when he ruled out the establishment of a Palestinian state while campaigning for the March 17 general election but later backtracked on the comments. "... The danger here is that Israel as a whole loses credibility," Obama said in the interview with Israel's Channel 2. "Already, the international community does not believe that Israel is serious about a two-state solution."

On Sunday, Netanyahu said he was committed to the establishment of a Palestinian state, calling on the Palestinian leadership to return to negotiations unconditionally. Obama however said Netanyahu's statements on the subject after the election have had "so many caveats, so many conditions, that it is not realistic to think that those conditions would be met any time in the near future.

"And I think that it is difficult to simply accept at face value the statement made after an election that would appear to look as if this is simply an effort to return to the previous status quo in which we talk about peace in the abstract, but it's always tomorrow, it's always later," Obama said.

Asked about a continued U.S. veto at the United Nations on resolutions condemning Israel, Obama said that a lack of progress in peace efforts would make such a policy more "difficult."

Prospects for a renewal of peace talks, which fell apart in April 2014, look bleak with the lack of trust between the sides exacerbated by the formation of Netanyahu's new hardline coalition after the recent elections.

Meanwhile, the United Nations Secretary-General Ban Ki-moon urged Israel for an immediate resumption of Israeli-Palestinian peace negotiations to create a two-state solution and an end to unilateral actions "that erode trust."

UNRWA Commissioner-General Pierre Krahenbuhl said there are over 5 million registered Palestinian refugees in the region today, which "equates to the population of Norway or Singapore."

He said they "face an existential crisis on many fronts," blockaded in Gaza by Israel, living under fear of detention by the Israeli army in the West Bank, and trapped by "a merciless siege and violence" in the Yarmouk refugee camp outside the Syrian capital Damascus.

"Their isolation, exclusion and dispossession represent a time bomb for the region, a denial of dignity and rights that must be addressed," Krahenbuhl said. He said 65 percent of registered Palestinian refugees are under the age of 25, educated but unemployed, "determined to engage but with few prospects and limited freedom of movement to do so." He warned that this "will lead many to despair or increasing numbers to choose dangerous routes across the Mediterranean or beyond."
Last Update: Jun 03, 2015 10:46 pm
RELATED TOPICS