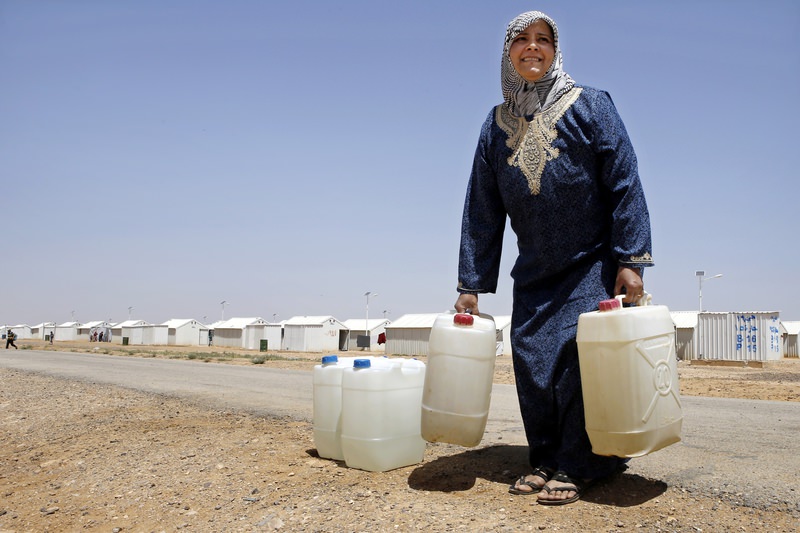 Since Jordan closed its eastern border crossing in March, around 1,000 Syrians have struggled to survive in the remote desert areas just inside Jordan’s border with no access to water, food or security

Hundreds of Syrian refugees have been left stranded in the Jordanian desert with limited access to water, food and medical assistance, after Jordanian authorities refused the informal border crossing of Syrians in March, Human Rights Watch (HRW) reported on Tuesday. The report reveals the human tragedy that many Syrian refugees have been facing in Jordan. HRW urged Jordan to "allow the stranded [Syrians] to move further into Jordan, and let UNHCR, the U.N. refugee agency, register them as asylum seekers." Based on satellite imagery, HRW identified two encampments at two informal border crossing points at Hadalat and Rukban, both located near Jordanian military bases with more than approximately 250 informal tent shelters in total. Around 2,500 Syrians, whose entry to the country was not allowed, are struggling to survive in the desert, according to data released on April 10. By late May, this number had dropped to around 1,000, according to HRW estimates after the Jordanian border guards allowed some of them to move out of the border zone.

"Jordan has gone to great lengths to meet the needs of the Syrian refugees," said Nadim Houry, deputy Middle East and North Africa director of HRW. "But that is no excuse to abandon newer arrivals in remote border areas for weeks without effective protection and regular aid access."

The closure of the informal eastern crossing in late March, as part of Jordanian border policy, has forced Syrians refugees in the neighboring country to remain in "a raised barrier of sand, or 'berm,' which marks the Jordanian limit of a border zone between Syria and Jordan."

The strict Jordanian border policy also forced them to travel hundreds of kilometers east "through the desert and often through active conflict areas" as they risk their lives to enter and take shelter in Jordan. "There are worrying signs … that the journey out of Syria is becoming tougher, with many people forced to pay bribes at armed checkpoints proliferating along the borders. Refugees crossing the desert into eastern Jordan are being forced to pay smugglers hefty sums ($100 a head or more) to take them to safety," the U.N. refugee agency said in a statement released in August 2014.

In addition, Syrian refugees in Lebanon are suffering from increasing violence as uncertainty and fear has prompted chaos in the country since the outbreak of clashes between the Lebanese Army and extremist groups like the Islamic State of Iraq and al-Sham (ISIS) and al-Nusra Front erupted in the northeastern town of Arsal in August 2014. As the clashes continue, HRW reported 11 violent attacks in August and September against unarmed Syrians refugees with the aim of expelling Syrians from specific neighborhoods while calling on security forces and local authorities to "take adequate steps" in order to protect Syrian refugees from discrimination and violence.

Syrians constitute the majority of Jordan's refugee population with 747,360 residing in Jordan, according to UNHRC figures released in January 2015. UNHRC expects new arrivals of Syrians in Jordan, with the number of Syrian refugees expected to hit 937,830 by December 2015.
Last Update: Jun 03, 2015 3:23 pm
RELATED TOPICS