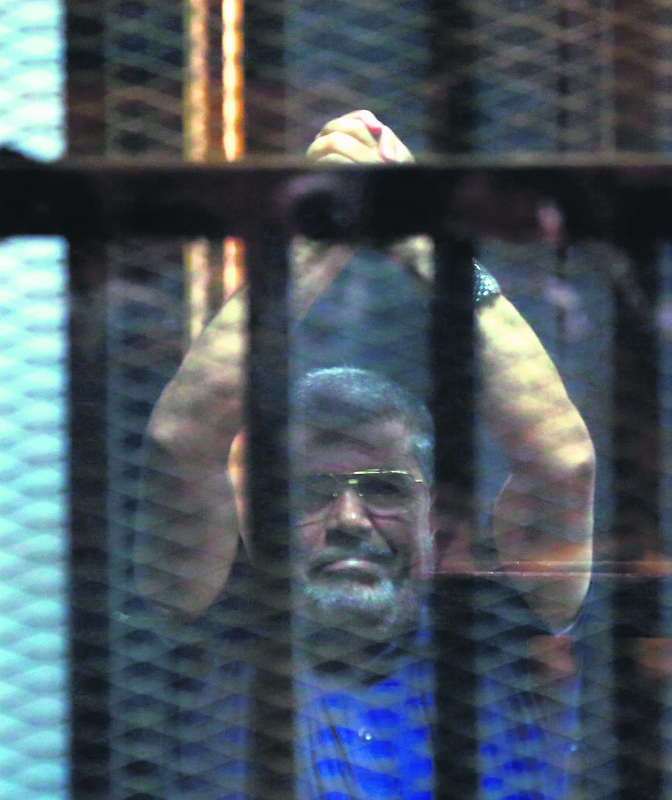 Mohammed Morsi became Egypt's first democratically elected president in 2012, succeeding ousted President Hosni Mubarak. Morsi served for one year until he and the Muslim Brotherhood-led government were overthrown by the military following three days of mass protests against his rule in July 2013, spearheaded by the then minister of defense, Abdel-Fattah el-Sissi. In June 2014, Sissi assumed the presidency and launched a crackdown on Morsi and the Muslim Brotherhood, arresting members and supporters en masse. Last month, an Egyptian court sentenced Morsi to death for a mass prison break in 2011.

Rodney Dixon is a barrister at Temple Garden Chambers, specializing in public law at both national and international levels. Utilizing his expertise in representing governments, political leaders, military officers, international organizations and victims in a wide array of human rights and criminal cases, he is currently serving as legal defense for the deposed president, his government and the Freedom and Justice Party (FJP). Dixon met with Daily Sabah for an interview to offer an overview of where Morsi's recent death sentence currently stands in the international community.

Lila Hassan: What are the particular problems you have with the Morsi case right now?

Rodney Dixon: Looking at it from the legal point of view, we don't have access to President Morsi at the moment. That is being denied by the Egyptian authorities. We only have access to members of his political party – the Freedom and Justice Party – that we represent, but that is only because they've been able to get out or flee Egypt.

The major problem that we face is getting decisions taken by international bodies and regional bodies and courts implemented. So, the African Commission on Human and People's rights has decided that Egypt is in violation of international law and should suspend the death sentences. But that has not been implemented. That can only happen through the African Union taking steps or the U.N. taking steps. So, implementation of legal orders is absolutely critical to both saving the lives of people who are on death row but also making sure that the current regime is not able to continue acting in the repressive way that it is.

Hassan: Do you think Morsi was fairly judged?

Dixon: No, and it has been widely stated that he was not. It wasn't a fair trial, it wasn't independent. There has been interference from the political authorities. We've got evidence of that, proof of that. The trial has not guaranteed his rights to fair legal representation and to present a defense.

It's a political trial on essentially trumped up charges. It's being used to get rid of the opposition and the forces for democracy in Egypt by the military regime.

What do you think the general atmosphere is like in Egypt right now with the death sentence looming? Does it have massive support, massive condemnation or apathy?

I think there's a lot of concern throughout the world about it. It's been widely condemned. Of course in Egypt as well, across the board. It's not just members of the Muslim Brotherhood, but a wide range of people who have condemned it. But that's not good enough. That's just a start. We need to now take steps to ensure that it's not implemented. That's the challenge for the international community at this stage. They can't keep acting as though nothing has happened. Sissi is travelling to South Africa next week for the African Summit while African leaders are accepting him even though he's acting in this way. Likewise with the U.N. with Britain to Ban Ki-moon, they must take steps now to isolate him to make sure the death sentence is not implemented. It's not good enough to simply condemn it. That's only the first step.

How is Morsi feeling throughout all of this? Is his morale strong?

Well I think we've all seen the statements he's been making. He's been very firm despite the appalling conditions that he faces. We don't have direct access to him, but what I think what has been seen publicly reflects somebody who is defiant and is standing against an undemocratic and autocratic regime.

And in terms of the reactions you have received so far from international actors regarding the death sentence, have they assisted?

Yes, they have assisted and there has been widespread condemnation, even from countries that you might not expect. [Hassan: Such as?] Well, even if you look at a number of Western countries who have not always been prepared to stand up against Sissi, they have condemned this widely as an act that is both not based on the law or fair trial and is also detrimental to the future of Egypt, and that has certainly assisted. But that's, as I said, that's only the first step. They have got to take collective action now to stop it happening.

Which international actors would you like to see at the forefront of this case?

I think the European Union and the U.S. are obviously crucial because they supply a lot of support to the Egyptian government and they have the ability to use sanctions, if necessary, to influence change in the country. In exactly the same way as they've used sanctions in relation to the situation in Ukraine, they could do exactly the same here. There's no reason why they should act any differently or have double standards.

Turkey has a very interesting place in this, especially with its relationship to the EU. Do you see Turkey as being one of the countries you can use as an avenue to get European actors more involved in the case?

Yes, certainly. Turkey has been very outspoken, and is to be commended. It should use all of its influence and authority to get other countries to be similarly strong. It's always been clear and principled.

What obstacles do you expect the defense to face moving forward?

I think implementation now of the legal orders to stop what's happening is the biggest obstacle. It's really whether there's the political will to go beyond rhetoric and to isolate Sissi. That is the key. They [international actors] have to act together to isolate Sissi. He should not be allowed to travel to countries. There should be diplomatic isolation and he should be shown to be the pariah that he is.

You think in doing that, Sissi will be pressured enough to release Morsi and drop the charges against him?

Yes, I think that if there is enough pressure on him and there is the potential for sanctions to be imposed as well for it to hurt the military regime from the financial point of view, yes, there will be enough pressure to stop this. There can never be a one-hundred-percent guarantee because we're dealing with a very volatile regime here, but every step must still be taken. It has to do with the death penalty, people's lives, hundreds of people's lives, but it's also the future of this country.

How optimistic are you that the death sentence will be overturned?

That depends entirely on the will of the international community. I am hopeful that they will do the right thing and not shift off responsibilities.
Last Update: Jun 06, 2015 1:46 am
RELATED TOPICS