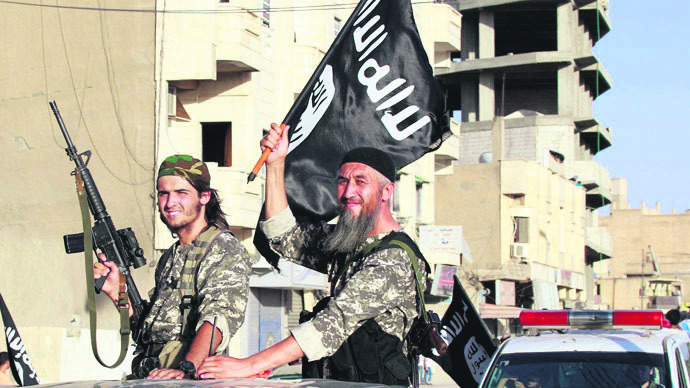 ISIS militants wave their flag in Syria's Raqqa, one of its strongholds.
by Mehmed Cavid Barkçin Jun 08, 2015 12:00 am

Despite the efforts of Iraqi troops, Iranian backed Shiite militias and U.S.-led airstrikes, ISIS continues to make advance in both Syria and Iraq with experts claiming that the U.S. has to change its policy

The threat posed by the Islamic State of Iraq and al-Sham (ISIS) in the Middle East continues to be an international issue. With ISIS's seizure of Ramadi and Palmyra in Iraq and Syria respectively, the current policy of the U.S.-led coalition forces against ISIS has again come under scrutiny and alternative approaches are being discussed. At a recent hearing of the House Committee on Foreign Affairs, a subdivision of the U.S. Congress, experts argued that while the airstrikes are crucial in the war against ISIS, it does not constitute a solution by itself.

The hearing took place on June 3 and was held by the Subcommittee on the Middle East and North Africa. Named "U.S. Policy Towards ISIS After Terror Group Seizes Ramadi and Palmyra," the hearing had three experts as speakers.

Michael Rubin of AEI, while offering numerous possible solutions on different aspects to the conflict such as the political consolidation of Iraq, said that deployment of U.S. personnel with the purpose of training the militia would be both beneficial for Iraq and the U.S.

Anthony H. Cordesman of CSIS, on the other hand, said that "Iraq and Syria have become case studies in the need for more effective strategies, transparency, and independent review," while defining the two countries as "failed states." He asserted that the U.S. needed to develop a clear and comprehensive strategy in providing support both as airstrikes and train-and-assist program to the Iraqi government.

Matthew Spence, former Deputy Assistant Secretary for Middle East Policy, said that the coalition "airstrikes alone cannot address the challenges in Iraq or Syria" and that "success requires capable local partners fighting on the ground." He added that one of the key elements of the strategy must focus on building the capabilities of the Iraqi Security Forces, peshmerga ground forces, as well as local fighters in Syria.

Discussions on a clear and comprehensive strategy, along with defining Syria as a "failed state," are important as high-ranking Turkish officials, especially Prime Minister Ahmet Davutoğlu and Minister of Foreign Affairs Mevlüt Çavuşoğlu, have been advocating that coalition airstrikes alone were insufficient in the fight against ISIS.
Last Update: Jun 08, 2015 1:34 am
RELATED TOPICS