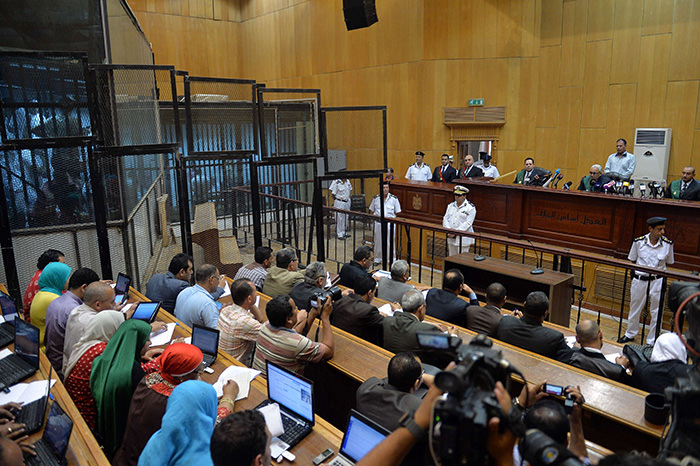 Egyptian defendants sit behind bars as journalists attend their retrial over a 2012 stadium riot in the canal city of Port Said that left 74 people dead on May 30, 2015 at the police academy in Cairo. (AFP Photo)
by Jun 09, 2015 12:00 am
An Egyptian court yesterday upheld death sentences against 11 football fans over a February 2012 riot in the eastern city of Port Said that cost the lives of 74 people.

The Port Said riot, the country's deadliest sports-related incident, broke out when fans of home team Al-Masry and Cairo's Al-Ahly clashed after a premier league match between the two clubs.

A Cairo criminal court confirmed the death sentences passed in April against 11 Al-Masry fans, one of whom is on the run, after consulting Egypt's grand mufti, the government interpreter of Islamic law who plays an advisory role. The court also sentenced two police officers, including then Port Said's police chief Essam Samak, and two Al-Masry club officials to five years in jail. The rest of the 72 defendants were handed sentences of between one and 15 years behind bars.

The court acquitted 21 defendants, including seven security officers and an Al-Masry official. Among the defendants were nine police officers and three officials from Al-Masry, and the rest were fans of the Port Said club. The sentence can still be appealed before Egypt's cassation court.

The clashes in the Port Said stadium sparked several days of violent protests in Cairo, in which another 16 people were killed in fighting with security forces.
Last Update: Jun 09, 2015 3:36 pm
RELATED TOPICS