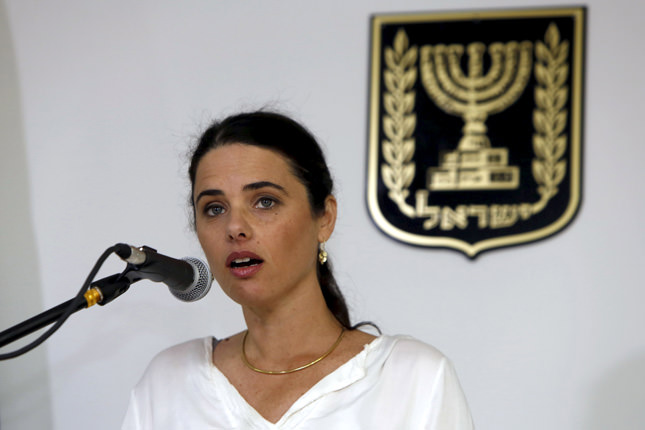 by Mehmet Çelik Jun 10, 2015 12:00 am
Israel's right-wing government has proposed new legislation that would limit the work of Israeli NGO's, including the funding they receive from international organizations and the governments of other countries. Israel's Justice Minister Ayelet Shaked of the Jewish Home party has declared her stance against the NGOs that take foreign money and then criticize Israel or declare boycotts against the state of Israel for its treatment of Palestinian civilians in the occupied territories.

Shaked accuses the NGOs of attempting to delegitimize Israel's existence as a "Jewish and democratic state," and had called on Israel to "boycott anyone who boycotts us" on June 3 during her address at the Knesset.

If the legislation, which is currently in draft form, is passed, the NGOs will face a crackdown by the government and many might have to close down, which critics say will delegitimize Israel's claims of being a democratic state.

"There's a sense on the Israeli right that progressive or liberal viewpoints are a danger and that something has to be done about it," said Matt Duss, the president of the Foundation for Middle East Peace in Washington, D.C., Reuters reported.

"It creates a hostile environment for those who express legitimate criticism and would put Israel in some very bad company," the report added.

Shaked's crackdown focuses on less than one hundred NGOs – among the 300,000 registered – whose work focuses on the Israeli-Palestinian conflict, and which receive funds from the international community. Other ministers from the right-wing coalition have also shown their determination to penalize NGOs or anyone who criticizes Israel. Israel's Culture Minister Miri Regev said on June 10 that she will cut state funds for artists who show sympathy to the Palestinian struggle, according to the report. Among the NGOs that face a threat from the Israeli government is the Israeli NGO B'Tselem, an organization formed by a group of academics, lawyers and politicians that draws attention to military abuses in the occupied Palestinian territory - whose name means "in the image of" and is a synonym in Hebrew for human dignity.

"A super-enormous battle is being waged for the future of our society," said Sarit Michaeli, B'Tselem's spokeswoman, and added that "What we have here are many years of intense efforts to discredit Israel's human rights community, primarily related to our work exposing human rights violations."

Israel's crackdown on NGOs is not new, but it has become a highly-debated topic in recent days as one of the global movements boycotting Israel, Boycott, Divestment and Sanctions (BDS) has gained international popularity and drawn media's attention.

The group aims to boycott Israel until it complies with international law and Palestinian rights. It was initiated by Palestinian civil society in 2005 and is coordinated by the Palestinian BDS National Committee (BNC), which was established in 2007. The Netanyahu government has taken a harsh stance against BDS, further legitimizing their struggle. Similarly, the group Breaking the Silence, a left-wing NGO formed by a group of "veteran combatants who have served in the Israeli military since the start of the Second Intifada and have taken it upon themselves to expose to the Israeli public the reality of everyday life in the occupied territories," as they have described themselves on their website, is another group that stands against the Israeli government's hawkish attitude.

Breaking the Silence met with senior White House officials last week to hear testimonies that the organization had collected on alleged human-rights violations by the Israel Defense Forces during last summer's war in Gaza, Haaretz reported. The Israeli government has opposed Breaking the Silence, and attempts have been made to cancel their international events. Despite pressure from the Israeli government, hosting countries have supported the movement.