Pakistan executes man who was 15 when convicted of murder 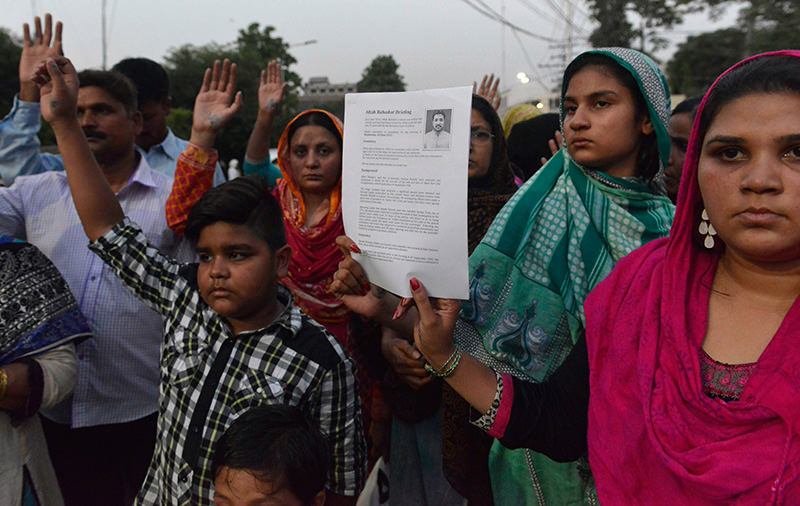 Relatives of convicted murderer Aftab Bahadur Masih stage a protest to stop his execution in Lahore on June 9, 2015 (AFP Photo)
by Daily Sabah with Agencies Jun 10, 2015 12:00 am
A Pakistani man, convicted of murder at the age of 15, was executed on Wednesday, officials stated. Lawyers of the man said he was tortured into confessing, in a case that has prompted concern among rights groups and drawn international condemnation.

Aftab Bahadur Masih, now 38, was hanged at a jail in the eastern city of Lahore for killing three people in 1992, a prison official said on condition of anonymity.

At that time, the minimum age of legal responsibility in the country was 15, before it was raised to 18 in 2000.

"Aftab Bahadur Masih, a Christian man, was hanged in Kot Lakhpat prison of Lahore Wednesday morning," an official at the jail told AFP on condition of anonymity. Another prison official confirmed the hanging.

Hours later the Supreme Court rejected an appeal by Shafqat Hussain, convicted of killing a young boy in 2004, when his lawyers and family say he was 14 and therefore not eligible for execution under Pakistani law.

Pakistan lifted a six-year moratorium on executions in December, after Taliban militants killed 136 children at a school in the north-western city of Peshawar.

Around 150 convicts have been hanged in the past six months, putting Pakistan among the countries with the highest annual rate of executions, which include China, Iran and Saudi Arabia.
Last Update: Jun 10, 2015 4:43 pm
RELATED TOPICS