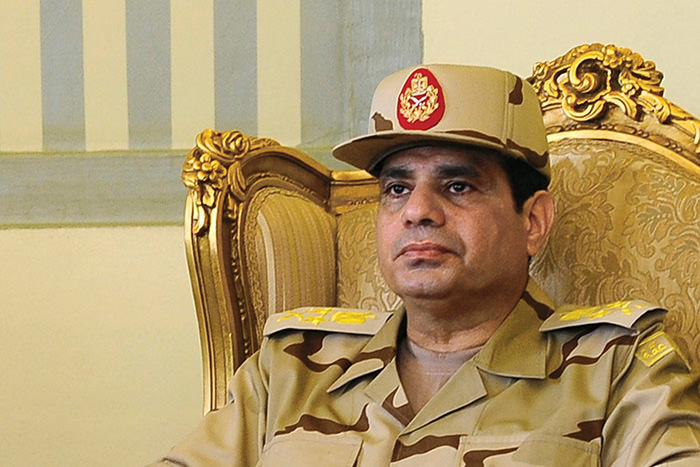 |File Photo
by Anadolu Agency Jun 10, 2015 12:00 am
The South African Muslim Lawyers Association (MLA) has filed an official legal request for the arrest of Egyptian President Abdel-Fattah el-Sissi when he arrives in Johannesburg on Friday to attend the 25th African Union Summit.

"We believe al-Sissi committed war crimes and crimes against humanity for the horrendous killings that resulted from the [2013] coup in Egypt," attorney Yousha Tayoub, an MLA member, told Anadolu Agency on Wednesday.

He said Sissi's upcoming visit would present a good opportunity for the South African authorities to arrest, investigate and prosecute the Egyptian president for his alleged crimes.

"We have overwhelming evidence proving that al-Sissi committed war crimes and crimes against humanity. We have presented our evidence to the authorities and are hopeful they will act," Tayoub said.

He added that Sisi should be given the chance to answer the charges against him in a court of law.

"There has been a lot of killing and persecution of members of [Egypt's] Muslim Brotherhood and its supporters [under al-Sissi's rule]," he said.

Tayoub noted that South Africa was a signatory to the Rome Statute, which formally established the International Criminal Court (ICC), which means that South African authorities can arrest anyone accused of committing genocide, crimes against humanity, war crimes or crimes of aggression.

The Media Review Network (MRN), a South African advocacy group, likewise supports calls for Sissi's arrest upon his arrival in the country.

"The MRN reminds the South African government that the crimes committed by al-Sisi are universally condemned offenses," MRN spokesman Ibrahim Vawda said Wednesday. "War criminals are considered enemies of all humankind; our young democracy must not be seen as a safe haven for such criminals."

"Therefore, a quick resolution of this application [for Sissi's arrest] must be treated as a matter of urgency," he said in an emailed statement to Anadolu Agency.

It has yet to be seen, however, whether the South African government will take steps to arrest the visiting head of state.

A former military commander, Sissi is widely seen as the architect of the 2013 coup against President Mohamed Morsi, Egypt's first freely elected president and a Muslim Brotherhood leader.