US prepares open military base in Anbar, Sunnis distrusting at Baghdad 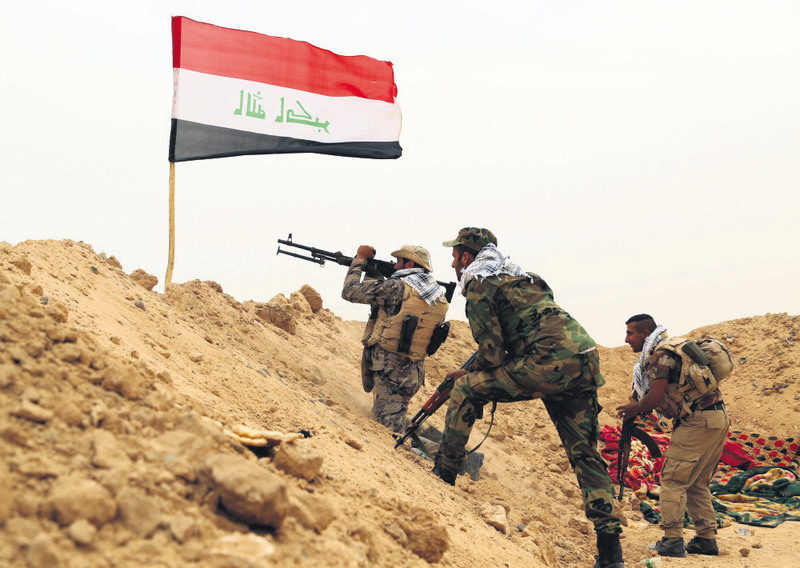 The Obama administration is preparing to open a military base in Iraq's Anbar to train more Iraqi troops for the battle against ISIS, but Iraq's Sunnis are concerned over the presence of Iranian-backed Shiite militias

The Obama administration is preparing a plan to set up a new military base in Iraq's Anbar province and send several hundred additional trainers and advisers to help bolster Iraqi forces that have struggled in the fight against Islamic State of Iraq and al-Sham (ISIS) militants there, U.S. officials said on Tuesday. U.S. President Barack Obama could give final approval as early as Wednesday to expand the U.S. military contingent in Iraq, a source close to the discussions said, marking the first significant adjustment in his strategy since the insurgents seized Anbar's capital Ramadi last month. U.S. officials, speaking on condition of anonymity, expressed hope that a even a modestly beefed-up U.S. presence could help Iraq forces plan and carry out a counterattack to retake Ramadi. But many critics have said previously that the current 3,100-strong American contingent of trainers and advisers is far from enough to turn the tide of battle.

Obama is expected to stick to his stance against sending American troops into combat or even close to the front lines, according to the officials, who spoke on condition of anonymity. But increased U.S. numbers in Iraq's volatile Sunni heartland raises could mean running greater risks. The proposed build-up comes as Obama's anti-ISIS policy faces mounting criticism at home and abroad. U.S.-backed Iraqi forces have made only halting progress against ISIS militants who seized about a third of Iraq over the past year in a brutal campaign marked by mass killings and beheadings.

Obama said on Monday the United States did not yet have a "complete strategy" for training Iraqi security forces to reconquer land lost to ISIS fighters.

Since the fall of Ramadi, which drew harsh U.S. criticism of the Iraqi military performance, Washington has begun to speed up supplies of weapons to the government forces and examine ways to improve the training program. With Obama closing in on a decision, one U.S. official speaking on condition of anonymity said the increased U.S. deployment would likely entail several hundred more troops. A second official said the figure would be less than 500. While it was unclear exactly how many would be deployed directly to Anbar, one U.S. official said many of those sent to the province would be stationed at a new training base there. U.S. forces have already conducted training at the al-Asad military base in western Anbar. Speculation on the location a new installation has focused on the area near the town of Habbaniya, the site of an Iraqi army base. A new site would allow U.S. forces to provide greater support for Sunni tribal fighters, who have yet to receive all of the backing and arms promised by the Shi'ite-led government in Baghdad. "We are considering a range of options to accelerate the training and equipping of Iraqi security forces in order to support them in taking the fight to ISIL. Those options include sending additional trainers to Iraq," said Alistair Baskey, a spokesman for the White House National Security Council. But he declined to provide details.

General Martin Dempsey, chairman of the Joint Chiefs of Staff, made clear during a visit to Jerusalem that there were no plans to fundamentally alter Obama's military strategy that has so far kept U.S. ground troops off the front lines. "We've made some recommendations on potential enhancements to the training and equip mission," Dempsey said, citing options including new training sites. Speaking to reporters traveling with him, Dempsey did not say how many extra U.S. troops may be involved. Another senior U.S. military official said only that the number would be modest. At the Pentagon, spokesman Colonel Steve Warren said the United States had noted that forces in Iraq who had undergone U.S.-backed training emerged as "an improved fighting force." "Because of those observations, we've determined that it is better to train more Iraqi security forces and we're now working through a strategy for how to do that," Warren said. The initial plan was to train about 9,000 Iraqi troops in a year. As of last Thursday, 8,920 Iraqi troops had received training at four different sites and another 2,601 were currently in some stage of training, he said.

Although the U.S. wants Iraqi government to increase pressure on ISIS, Iraq's Deputy President Usama al-Nujayfi said that Sunnis do not trust Iraq's central government. Usama al-Nujayfi-a prominent Sunni-made the claim on Tuesday, which coincides with the first anniversary of the fall of the northern province of Mosul to ISIS in 2014. "Sunnis do not trust the government led by the Shia," Nujayfi said. "Baghdad still continues its policy of politically targeting Sunnis." Nujayfi said he was disappointed in the performance of Prime Minister Haidar al-Abadi's government and complained about a lack of effort to liberate Mosul, claiming that Baghdad's failure had forced local people to establish camps to train volunteer fighters without support. "Ninawah [province] will only be liberated by its sons and they are united in brigades ready to defend their land? They are waiting for weapons," Nujayfi said, stating that it is the government's responsibility to support volunteers. He also blamed former Prime Minister Nouri al-Maliki and his close officers for the fall of Mosul.

The overt Iranian role and the prominence of Shiite militias in the anti-ISIS campaign have raised fears of possible sectarian cleansing in the recaptured cities. The U.S. and Human Rights Watch (HRW) warned an offensive to retake control of cities must not fuel sectarian tensions. In a report released by HRW last month, it was revealed that Iraqi people are not only suffering from atrocities committed by ISIS militants but also from armed government-backed Shiite militants. The report said the militias work closely with Iraqi government forces. "Abuses by militias allied with Iraqi security forces in Sunni areas have escalated in recent months. Residents have been forced from their homes, kidnapped, and in some cases summarily executed." At least 3,000 people have fled their homes in the Muqdadiyya area of Diyala province since June 2014 and, since October, been prevented from returning. In addition to the events documented here, Human Rights Watch is conducting an investigation into more recent allegations that militia and SWAT forces killed 72 civilians in the town of Barwana, also in Muqdadiyya," the report said. The report also underlines that many have been abducted and dozens of families lost contact with their relatives. In a previous report released on last October by Amnesty International, which covers human rights violations in more than 150 countries it was claimed that the Iraqi government is largely responsible for the attacks on the civilians since the militias target Sunni Iraqis deliberately, as a response to the ISIS attacks, despite there being no concrete evidence that links ISIS and unarmed Sunnis. The report said "In recent months, Shi'a militias have been abducting and killing Sunni civilian men in Baghdad and around the country. These militias, often armed and backed by the government of Iraq, continue to operate with varying degrees of cooperation from government forces – ranging from tacit consent to coordinated, or even joint, operations. For these reasons, Amnesty International holds the government of Iraq largely responsible for the serious human rights abuses, including war crimes, committed by these militias."

Since last summer ISIS has been controlling most of Anbar province and Mosul. Iraqi people have been suffering from the ISIS brutality. Around 46,000 people have been killed in Iraq fighting ISIS over the last year, a local NGO said this week. According to Hashd, an NGO that documents cases of genocide, the casualties include 40,000 government troops, 3,000 members of the Al-Hashd al-Shaabi Shia militia, and 3,000 Kurdish Peshmerga fighters and Sunni tribesmen.
Last Update: Jun 11, 2015 12:51 am
RELATED TOPICS