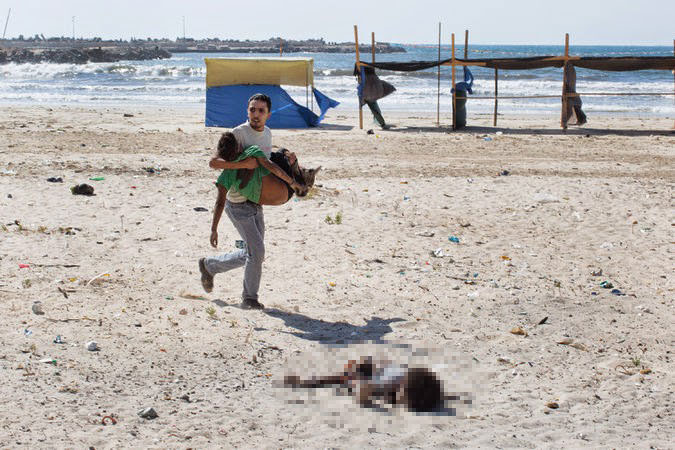 by Daily Sabah Jun 11, 2015 12:00 am
The Israeli military cleared itself of charges of suspected criminal conduct over last year's bombing of a beach in the Gaza Strip, which killed four Palestinian children. Israel said no action will be taken against those involved in the attack, calling the incident an accident.

Thursday's military statement says at the time, an aerial attack was conducted on a target believed to be Hamas militants. It says the children's tragic deaths were an accident and did not affect the legality of the attack.

Last summer, the killing of the four Palestinian boys prompted a five-hour cease-fire between Israel and Hamas during the 50-day war in Gaza, also known as "Operation Protective Edge." The four boys were from the same family. Cousins Ahed Atef Bakr and Zakaria Ahed Bakr, both 10 years-old, 9-year-old Mohamed Ramez Bakr and 11-year-old Ismail Mohamed Bakr were playing on the beach in Gaza City when they were hit in strikes witnessed by journalists staying at a beachfront hotel.

Immediately following their killing, the Israeli Defense Forces (IDF) launched an investigation. At the time, the IDF said the real target of the bombing were Hamas operatives and called the boys' deaths from their strikes a "tragic outcome," according to a statement released.

The case of the four Palestinian boys, according to the Israeli military, cannot be looked into further due to an inability to identify who was responsible for the attacks. "The investigation's findings show that due to the circumstances, the forces who took part in the strike had no way of identifying that the figures spotted by aerial surveillance were in fact children," Israeli military prosecutors said, in a statement, according to Haaretz.

Journalists who witnessed the attack say that it took place "on a quay at the port," but the Israeli military claimed it was targeted at Hamas terrorist operatives in a compound filled with the group's personnel.

"Shortly before the incident, an intelligence assessment was established that indicated that operatives from Hamas's Naval Forces would gather in the military compound in order to prepare for military activity against the IDF [Israel Defense Forces]. … It should be stressed that the figures were not identified at any point during the incident, as children," Israeli military spokesman Lt. Col. Peter Lerner said, in a statement released Thursday.

"Accordingly, the Military Advocate General ordered that the investigation file be closed without any further legal proceedings - criminal or disciplinary - to be taken against those involved in the incident," he added.

Currently, the Israeli military has opened up three other internal investigations into the incidents involving the actions taken and the conduct of the IDF during the Israel-Gaza war. One of these incidents' investigations was prompted by testimony given by an Israeli soldier to the activist group Breaking the Silence, an Israeli activist group composed of active IDF soldiers and veterans confessing testimony of their served time in the Israeli army.
The group published a report last month accusing the Israeli military of using a "policy of indiscriminate fire" on Palestinian civilians, which led to the killing of hundreds of innocent Palestinians.

Israel has referred about 100 cases to legal examination since the Israel-Gaza war last summer killed over 2,200 Palestinians. Among those killed, 1,492 were civilians, along with 73 people on the Israeli side, 67 of who were soldiers, according to the U.N.
The U.N.'s then top human rights official Navi Pillay accused Israel of having shown a "disregard for international humanitarian law and for the right to life."

Israel closing this case comes after Palestine joined the International Criminal Court in April and plans to pursue a case against Israeli leaders over abuses and war crimes committed during last summer's war and in the occupied West Bank and East Jerusalem areas.

The killing of the four boys is likely going to be among the charges that Palestine brings before the ICC as evidence of war crimes.

The ICC is currently conducting a preliminary investigation into Israel and Hamas to establish whether war crimes were committed last summer.

The father of one of the Palestinian boys was outraged at the closing of the investigation, telling the Associated Press, "There is no justice in the internal investigation. We are counting on the ICC and human rights. We are not afraid and we are confident we will win because the world is with us."

During the 50-day war, Israel used air strikes from jets, helicopters and drones as well as thousands of artillery rounds, while Hamas fired thousands of rockets and heavily armed Gaza militants tunneled into Israel.

A U.N. Human Rights Council report about the war in Gaza is expected to be released in the coming future.