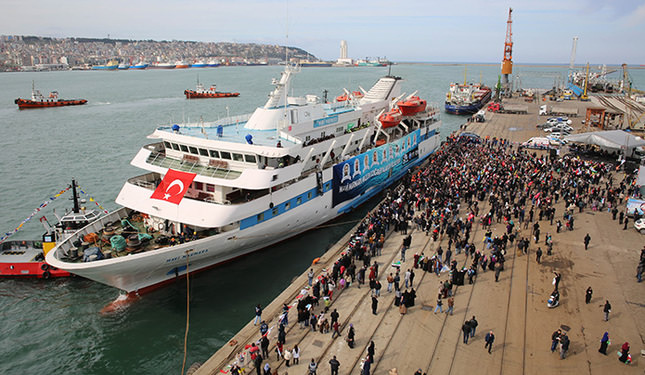 by Daily Sabah with Reuters Jun 11, 2015 12:00 am
A Madrid court on Thursday shelved a five-year-old investigation into a deadly Israeli raid on a Gaza-bound flotilla, though the probe could potentially be re-opened if Prime Minister Benjamin Netanyahu ever visits Spain. The 2010 raid killed nine Turkish activists, while a tenth Turk died four years later from his injuries. Spanish activists were also on board the ships.

Spain has pioneered the use of universal jurisdiction, the concept that crimes against humanity can be prosecuted across borders. The law was recently changed, however, so that judges could only investigate such cases if there was a Spanish connection, such as a native victim or perpetrator.

The Madrid court said in a written ruling on Thursday that it was closing the case in which Netanyahu and several of his ministers were accused of crimes against humanity. But it left the possibility that the case could be re-opened, saying the investigation was shut until Netanyahu and those targeted by it came to Spain. It did not make clear what steps would be taken if they did.

The convoy was led and established by the Turkish aid agency Humanitarian Aid Foundation (IHH), and was carrying humanitarian aid and construction materials for Palestinians in the Gaza Strip, which was under an Israeli blockade at the time.

Istanbul's public prosecutor's office demanded that the suspects be sentenced to prison terms amounting to a total of 18,032 years.

IHH had appealed in January 2014 against an International Criminal Court decision not to investigate the deadly Israeli raid on the Mavi Marmara.

However, in November, the court announced it would not investigate the maritime incident between pro-Palestinian demonstrators and Israeli forces due to a lack of "sufficient gravity."
Last Update: Jun 11, 2015 10:51 pm
RELATED TOPICS