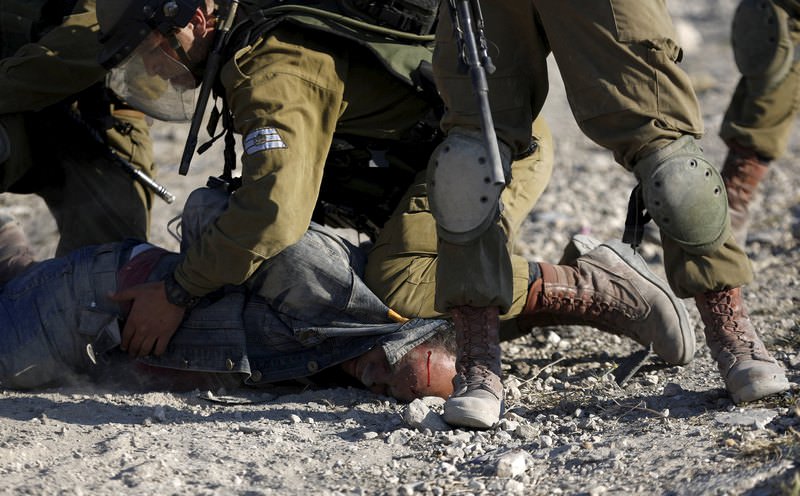 Israeli soldiers detain a Palestinian protester during clashes following a protest against Jewish settlements, in Jalazoun refugee camp, near the West Bank city of Ramallah June 12, 2015 (Reuters Photo)
by Mehmet Çelik Jun 13, 2015 12:00 am

Israel Defense Forces (IDF) have been caught on a video beating an unarmed arrested Palestinian man on Friday during the clashes between the Palestinians and the IDF in demonstrations in the Palestinian Jalazone refugee camp, Haaretz reported.

In the video captured by local Palestinian media, the Israeli soldiers from the Netzah Yehuda Battalion verbally humiliate the man and beat him, including hitting him with their rifles. The soldiers bring down the Palestinian man in the video, and later, seen punching him in the face and step on his head. After being hit by a group of IDF soldiers, the Palestinian man can be seen bleeding as a result of the hits he took from the soldiers.

The man is taken away by the IDF at the end of the video.

IDF officials have responded to the event saying, "Those [soldiers] involved in the incident were summoned to meet with the brigade commander [Sunday] morning for a clarification and debriefing of the event; if need be, disciplinary action will be taken against them. From a preliminary probe it seems their behavior does not befit that expected of an IDF soldier," Haaretz reported.

The Palestinian civilians in the refugee camps often face similar attacks by the IDF during protests against the Israel's inhumane treatments of Palestinians in the occupied territories and continous construction of new settlements. During the clashes between Palestinians and IDF many from the Palestinian youth gets detained or humiliated, and sometimes killed.

A recent report released by the Palestinian Center for Human Rights said that 2,280 Palestinians were killed and 11,724 others injured by Israeli forces, especially during the war on Gaza in 2014, which 1543 people were killed, making 2014 one of the deadliest years.