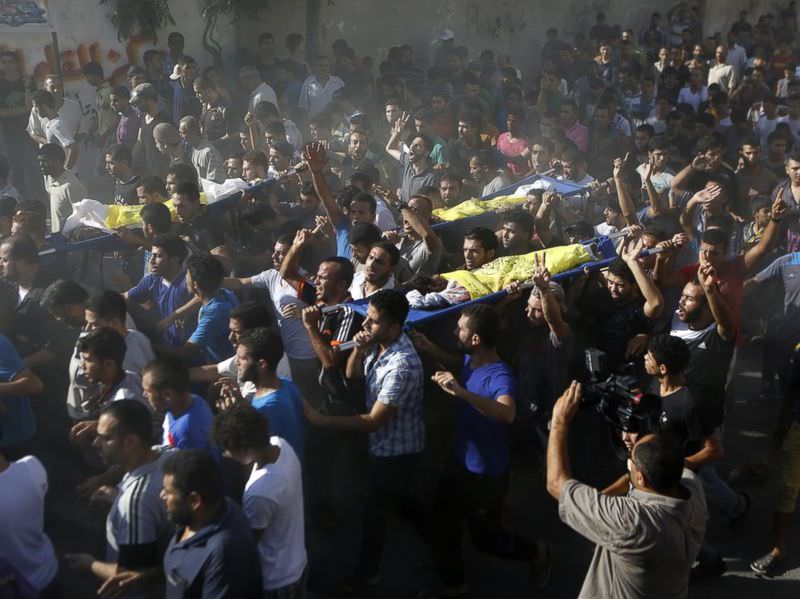 by Daily Sabah with AA Jun 15, 2015 12:00 am
Israeli military prosecutors have closed an investigation into the death of four Palestinian children by an airstrike on a Gaza Strip beach during last year's Israeli onslaught against the blockaded coastal territory.

"A number of investigations were closed, including the probe into the killing of four Palestinian children in an Israeli airstrike after a full criminal investigation," read an army statement issued on Thursday.

Raji Sourani, director of the Palestinian Center for Human Rights, however, voiced disdain for the Israeli probe.

"It's not the first time for Israel to claim that it's investigating war crimes against the Palestinians before closing the case without prosecuting the perpetrators," Sourani told Anadolu Agency.

"Israel says its domestic law justifies such attacks on defenseless children playing on the beach," he said. "So why is it dismayed when we [the Palestinians] say we will seek redress in the international courts?"

The Gaza City-based Palestinian Center for Human Rights is representing the families of the four children killed by Israeli airstrikes on July 16 of last year while playing football on a Gaza beach.

The slain children-all of whom hailed from the same extended family-were Ahed Bakr and Zakaria Bakr, both ten years old; Mohamed Bakr, 11; and Ismail Bakr, 9.

"The fact that Israeli military prosecutors have closed the case means we have exhausted all Israeli legal channels and have no choice but to seek redress at the International Criminal Court (ICC)," said Sourani.

"After receiving the necessary authorization, we struck an area known to be a base for [Palestinian resistance faction] Hamas' naval forces," he said.

"According to the investigation's findings, the attack was consistent with Israeli domestic law and international law," Efroni said.

Efroni's justifications, however, provided little comfort for Sharefeh Bakr, the mother of one of the young victims, who told Anadolu Agency that she never expected the Israeli army probe to deliver justice for her son.

"My dear son was killed by merciless monsters. I never expected them [the Israeli army] to own up to their vile deeds," she said.

"They broke my heart," said the grieving mother. "I can't laugh, I don't sleep-every day I cry for my son who was murdered so treacherously."

Sharefeh added that her second son, Al-Muntaser Bellah, 12, had been injured in the same attack, noting that his body remained riddled with shrapnel.

"My son suffers constant spasms. He swallows his tongue and tried more than once to commit suicide because of mental disorders," she said.

Ramz Bakr, meanwhile, the father of one of the other young victims, told Anadolu Agency: "I will not remain silent about the murder of my son, Mohamed. We have received assurances that the case would be brought up at the ICC at the earliest possible date."

He added: "No one expected the Israelis to admit to their crimes."

Mohamed Shalaldeh, an international law professor at Al-Quds University, explained that the closure of the investigations by Israeli military prosecutors means-in terms of international law-that the Palestinians have tried all domestic legal channels and are therefore entitled to seek redress at international courts.

"The Palestinian side has the right to seek international arbitration in the courts of certain European countries or at the ICC," he said. "And local [Palestinian] human rights organizations or individuals-not just the [Ramallah-based] Palestinian Authority-are entitled to go to the ICC."

In the summer of last year, Israel carried out a 51-day military offensive against the blockaded Gaza Strip with the stated aim of staunching rocket fire from the coastal enclave.

Over 2,160 Palestinians, mostly civilians, were killed-and another 11,000 injured-during the offensive, which finally ended with a cease-fire deal signed in Cairo.