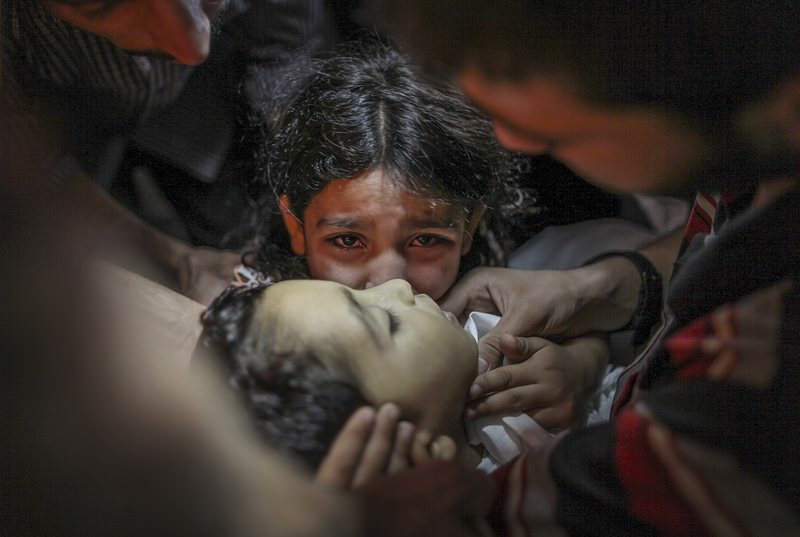 Despite the killing of more than 2,000 civilians in the Gaza Strip last summer, in a report that was issued a month before the U.N.’s report was published, Israel claimed that only Hamas was responsible for civilian casualties

Israel issued a report on Sunday claiming that its attacks on the Gaza Strip last summer were lawful, legitimate and did not target civilians, but rather only militants. Regarding the attacks on Gaza, which drew harsh criticism from several international and regional actors, the Israeli government's report accused Hamas, which runs Gaza, saying: "The 2014 Gaza Conflict was another peak of hostilities in the ongoing armed conflict that has been waged against Israel for well over a decade by terrorist organizations operating from the Gaza Strip." In response to why civilians died in the attacks, the report acquitted the Israeli army and said: "First, the conflict occurred primarily in an urban environment. Hamas combat manuals and training materials recovered by IDF [Israeli Defense Forces] in the Gaza Strip demonstrate that Hamas' strategy was to deliberately draw the hostilities into the urban terrain and to use built-up areas and the presence of the civilian population for tactical advantage and political gain. This strategy was obvious during the 2014 Gaza Conflict in view of the sheer scope of military activity that Hamas and other terrorist organizations embedded within the urban environment. Much of what may have appeared to external parties to be indiscriminate harm to civilians or purely civilian objects were in fact legitimate attacks against military targets that merely appear civilian, but were actually part of the military operations of these terrorist organizations," it said. Civilians were also harmed as a result of "unfortunate, yet lawful, incidental effects of legitimate military action in the vicinity of civilians and their surroundings," it added.‎

The Palestinian government rejected the claims. "Israel's decision to deny having targeted civilians in Gaza is the logical extension of what it did in the Gaza Strip," Ihab Bseiso, a spokesman for the Palestinian government in Ramallah, told Agence France-Presse. ‎He dismissed the report, saying Palestinians would only accept conclusions from an international inquiry such as the one to be published by the U.N. Human Rights Council on June 29.

"The 277-page report, which cited Israel's internal probes and statements from Western leaders backing its right to self-defense, suggested the Netanyahu government hoped to defuse criticism from the U.N. Human Rights Council (HRC) inquiry in advance. Deeming the HRC biased, Israel boycotted its investigators as it did those from the council who looked into its 2008-09 Gaza offensive. That HRC inquiry accused Israel of war crimes," Reuters reported. From the start of the Gaza conflict in July, the U.N. chief has voiced his concern over Israeli deadly strikes on civilians' residential areas and U.N.-run schools. Despite the apparent war crimes committed by Israel, there have been no sanctions imposed on Israel by the international community to stop its ever-increasing threat to Palestinians' lives in the occupied territories including East Jerusalem. Previous resolutions adopted by the U.N. prove that no improvement has been made so far regarding the continuing Israeli-Palestinian conflict. U.N. resolutions have little impact to prevent further violations of the human rights of Palestinians as Israel keeps continuing to violate international law, yet it has faced no sanctions from the international community so far. Recalling the 2014 Gaza conflict that left at least 2,500 Palestinians dead and 11,000 injured while partially or completely destroying thousands of residential structures across the territory, the U.N. Human Rights Council (UNHRC) adopted a resolution on July 23 to establish an independent commission of inquiry into the violations of human rights and international law in the Gaza Strip. The 46-member council met in Geneva in July, in the headquarters of the UNHRC to open a special session on the human rights situation in the occupied Palestinian territory, mainly in the Gaza Strip. A total of 29 states cast their votes in favor of a Palestinian-drafted resolution, with support from Arab and Muslim countries, China, Russia, Latin American and African nations, while 17 states, including some European nations abstained. The United States was the only member country to vote against the resolution. The independent commission was established to report Israel's war crimes and human rights violations to the 28th session of the UNHRC, which will take place in March 2015. The commission will review all documentation and information related to the Gaza conflict, submitted no later than Jan. 10, 2015. Another U.N. fact-finding mission was formed to investigate possible crimes committed by the Israeli Defense Force (IDF) during its deadly operation on Gaza which took place from Dec. 27, 2008 to Jan. 18, 2009. The mission published the Goldstone report in September 2009, which accused both Israel and Hamas of deliberately targeting civilians. Whether the U.N. reports were guided by human rights and international human rights has been of crucial importance, as politics still remains the main driving force for countries to solve the ongoing conflict. More than 1,500 Palestinians were killed during the 2009 Gaza conflict.

In one of its reports, released on last December, Amnesty International also has accused the Israeli military of committing war crimes in Gaza during attacks in the Gaza Strip. "Israeli forces have killed scores of Palestinian civilians in attacks targeting houses full of families, which in some cases have amounted to war crimes," read the report. The group investigated eight cases and said in the report, "In the eight cases documented by Amnesty International in this report, Israeli aircraft dropped aerial bombs on or launched missiles at homes they knew or should have known had civilians inside. The attacks resulted in the deaths of at least 111 individuals, including at least 104 civilians, and injured many others. Some 34 apartments and neighboring houses, home to more than 150 people, were destroyed or badly damaged in these attacks."