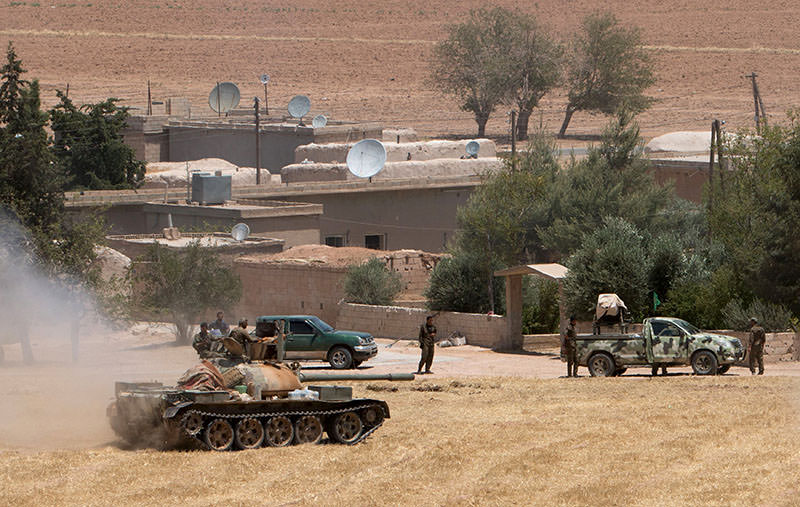 Kurdish People's Protection Units (YPG) fighters gather at the eastern entrances to the town of Tel Abyad of Raqqa governorate June 14, 2015 (REUTERS Photo)
by Daily Sabah with Reuters Jun 15, 2015 12:00 am
The Syrian Kurdish YPG militia said on Monday that it and its allies had taken full control of the town of Tel Abyad on the Turkish border, defeating the self-proclaimed Islamic State of Iraq and al-Sham (ISIS) fighters.

"It's now under complete control," YPG spokesman Redur Xelil said after a day of rapid advances in an offensive aided by U.S.-led air strikes. Tel Abyad had been important to ISIS as the nearest border town under its control to its de facto capital Raqqa.

The People's Protection Units (YPG) militia had earlier said that it had encircled the ISIS-controlled town of Tel Abyad, the nearest border town to the militant's de facto capital of Raqqa city.

On Sunday, Turkish authorities reopened the border after a few days of closure. The officials have confirmed that a total of 2,800 Syrian refugees have crossed into Turkey through the southern Akçakale border gate on Sunday, and a further 1,601 have been accepted on Monday into Turkey, according to AFAD's statement. But, ISIS fighters have tried to impede the refugees from crossing onto the other side of the border and asked people to go back to the city center of Tal Abyad. According to Doğan News Agency, five people trying to sneak into Turkey on Monday have been detained by Turkish security forces, and were later found out to be ISIS militants fleeing Tel Abyad.

The YPG has emerged as the main partner on the ground in Syria for the U.S.-led alliance that has been bombing ISIS in Syria and Iraq. Its advance into Raqqa province follows a campaign that drove ISIS from wide areas of neighbouring Hasaka province.

For the YPG --the armed wing of the Kurdish Democratic Union Party (PYD) in Rojava--, seizing Tel Abyad would help them link up Kurdish-controlled areas in Hasaka province and Kobani.

The expansion of Kurdish influence in Syria is, however, a concern for Turkey, which considers PKK-linked PYD's takeover of Tal Abyad as a threat. President Erdoğan, speaking to journalists on his way back from his two-day official trip to Azerbaijan, said he was worried that the vacuum left behind is being filled with PYD and PKK forces, which he noted might blight the security of Turkey's borders. "This does not bode well. There is an aura that Arabs and Turkmens are being targeted. There are 15,000 Arabs and Turkmens who have fled the region and crossed to Turkey," he said.

"The PKK and [its affiliate in Syria] PYD are being placed in the evacuated region. This leads to a structure that poses a threat to our borders," Erdoğan said calling on all segments to act according to the sensitivity of the country.

Deputy Prime Minister Bülent Arınç held a press meeting on Monday, touching upon the issue of the recent influx of Syrian refugees into Turkey. He said, although there are currently 1.6 million Syrian refugees in Turkey, and Turkey cannot close its borders for those who ask for help, it cannot continue to host further thousands of refugees in the long-run. He said, Turkey has accepted 16-17,000 Syrian refugees in the last few days and since it cannot bear the burden by itself, the Western countries should also shoulder some responsibility. This is why, Arınç said, Turkey has recently sent detailed letters explaining the current situation on Syria and refugees to the UN, UNHCR, EU Commission and Parliament, G7 foreign ministers, and NATO.
Last Update: Jun 15, 2015 11:53 pm
RELATED TOPICS