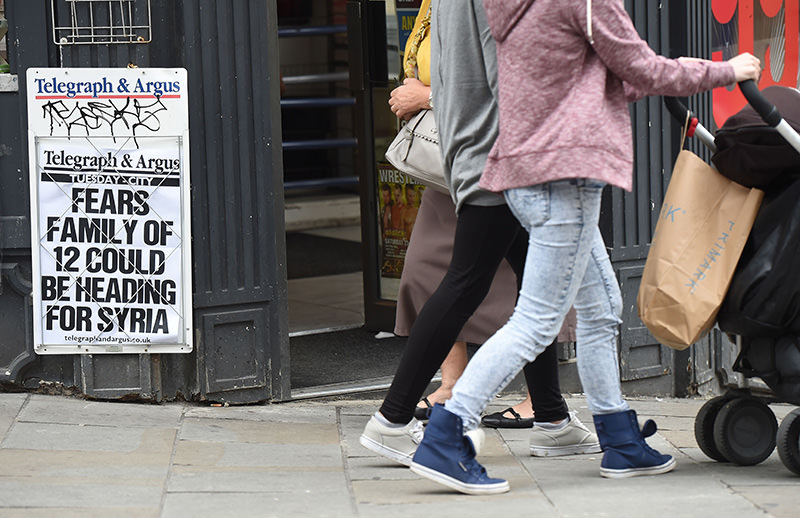 Pedestrians walk past a newsagents displaying a local paper headline on a notice board referring to fears regarding a missing family of 12 in Bradford, northern England, on June 16, 2015 (AFP Photo)
by Daily Sabah with Reuters Jun 16, 2015 12:00 am
British police said on Tuesday they were hunting for three sisters and their nine children whose family fear they may have traveled to Syria to join a relative believed to be involved in the fighting there.

Khadija Dawood, Sugra Dawood, Zohra Dawood and their children aged between three and 15, from Bradford in northern England were reported missing five days ago. According to media reports, the group disappeared after travelling to Medina in Saudi Arabia and there are now concerns they may have tried to join a brother of the three sisters who is suspected to be fighting with Islamic State of Iraq and al-Sham (ISIS) militants in Syria.

"One of the possibilities is they traveled to Turkey to travel to Syria," Balaal Khan, the lawyer acting on behalf of the women's husbands, said in a statement. "The suspicion, and main concern, is that the women have taken their children to Syria."

Naz Shah, a local member of parliament, told Sky News she had met the women's husbands and that they were shocked to have discovered their families were missing. "If they have gone to Syria then the alarm bells are really, really loud," she said, saying work had to be done to understand why the women would have taken such action without their husbands' consent.

British authorities estimate more than 700 Britons have traveled to Syria, with a significant proportion thought to have joined ISIS, which has taken over vast areas of the country and neighboring Iraq.

Families are among those to have traveled, and police said of those arrested on their return to Britain last year, 11 percent were women and 17 percent were under 20. "We are extremely concerned for the safety of the family," said Assistant Chief Constable Russ Foster of West Yorkshire Police. "Their families are gravely worried about them and want them home."

Britain had already become the target of accusations following its failure to spot three British teenage girls who left their homes to join ISIS by traveling through Turkey. The British authorities, which initially dodged responsibility and placed the blame on Turkey, were forced to accept their failure in spotting the teens in time. They later apologized to the families of the teens for the mistake. However, seemingly unable to learn its lesson, Britain continues to be incapable of preventing its citizens from joining ISIS and causes Turkey difficulties, as it claims to fight against the problem alone.

Turkey has been doing its part to identify and deliver potential foreign fighters who are seeking to cross the border to Syria to join ISIS, despite little cooperation in intelligence sharing from Western countries. The latest in a series of these efforts has been the detention of 10 foreigners at its borders, adding to the list of 1,186 people who have been deported so far. Turkey has also issued exclusion bans on 12,519 suspected individuals to date, demonstrating its success in blocking the passage of potential fighters heading to join ISIS through Turkey.

As part of Turkey's efforts, the police force has tightened security at transfer points such as airports, terminals, bus stations and rental car companies with a special risk analysis system, and a team tasked with tracking suspicious foreigners who travel to Turkey for the first time and those who are minors who do not have a hotel reservation.
Last Update: Jun 16, 2015 3:06 pm
RELATED TOPICS