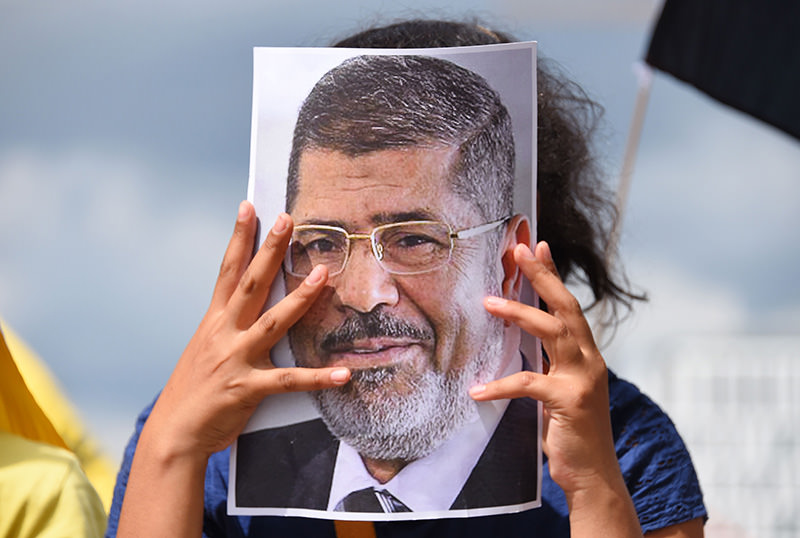 Protester holds a picture of Mohamed Morsi in front of the chancellery in Berlin, Germany, on June 3, 2015 (AFP Photo)
by Daily Sabah with Wires Jun 16, 2015 12:00 am
An Egyptian court on Tuesday sentenced the country's first democratically elected president, Mohamed Morsi to death over jailbreak charges.

The court had sought the death penalty for Morsi in May and referred its recommendation to Grand Mufti Shawqi Allam, the country's most senior religious authority, a step required by law for death sentences.

Prosecutors charged that Morsi and other leaders in the Muslim Brotherhood conspired with foreign organizations to storm prisons during the 2011 uprising.

Morsi appeared calm but impassive as state television showed him from time to time inside a soundproof defendant's cage while presiding judge Shaaban al-Shami read out the lengthy judgement in which he praised the 2013 demonstrations that preceded Morsi's ouster by the military.

The Brotherhood has dismissed the case as a political farce. It said in it Facebook statement that verdicts against #Morsi are 'null and void' and called for "popular uprising" on Friday. Amnesty International described the trial as "grossly unfair."

Turkey's Foreign Mevlüt Çavuşoğlu has also commented on Egyptian court's verdict, saying that the decision against Morsi was political and not based on law. "There is no law, there is no justice," Çavuşoğlu said Tuesday during a news conference broadcast live by TRT state television.

"We weren't actually surprised... to see such a political verdict from a regime like that," he said.

Following the announcement of the death sentence, Morsi's son, Osama Morsi, -who is also Morsi's lawyer-, told Turkey's private A Haber channel on Tuesday that they are ready to pay higher prices for the sake of Egyptian people and the future of the country. He said, "Coups will not only harm the president, but also the people", adding that their foremost responsibility is to eliminate the current military regime, which he believes will be the last one in Egypt's history.

Earlier on Tuesday, the same court sentenced Morsi, the country's first democratically elected president, to life in prison on charges of spying for the Palestinian Hamas movement, Lebanon's Shiite Hezbollah, and Iran.

Tuesday's verdicts can be appealed.

Then army chief and now President Abdel Fattah al-Sissi ousted Morsi on July 3, 2013, and since then has overseen a sweeping crackdown against his supporters.

The crackdown has left hundreds dead and thousands jailed.

Hundreds have been sentenced to death after speedy mass trials described by the United Nations as "unprecedented in recent history".

In the jailbreak trial, exiled Egyptian-born cleric Yusuf al-Qaradawi, who commands huge influence through his appearances on Al-Jazeera television from his base in Qatar, was also condemned to death in absentia.