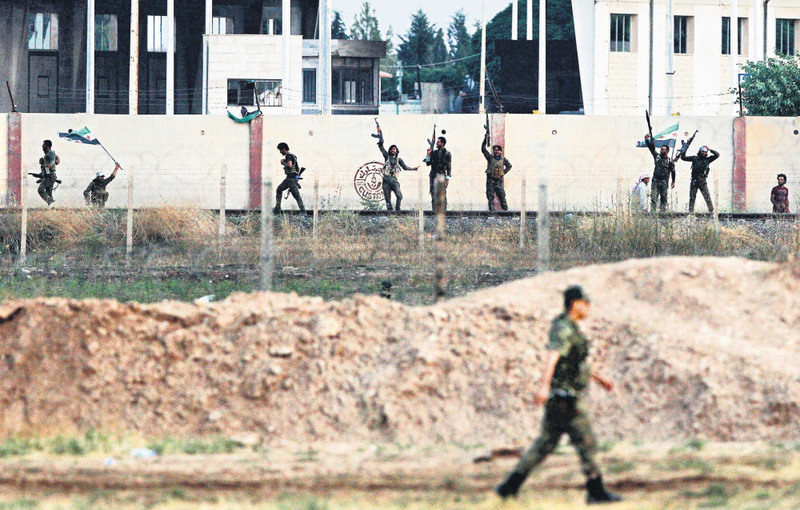 The Free Syrian Army and the Kurdish militant group YPG on Monday took control of the city of Tal Abyad, drawing concerns from Ankara. Deputy PM Arınç interpreted the Kurds' advance as an attempt to bring together cantons in Syria

There have been signs that Kurdish forces have sought to "bring together cantons" in Syria, Deputy Prime Minister Bülent Arınç said after a Cabinet meeting on Monday evening. His remarks came at a time when the Free Syrian Army and the PKK-linked Syrian-Kurdish Democratic Union Party's (PYD) People's Protection Units (YPG) gained control of the city of Tal Abyad from the Islamic State of Iraq and al-Sham (ISIS), which borders Turkey.

The PYD, of which the YPG is the military unit, announced in November 2014 that all Kurdish areas in northern Syria would declare the regions autonomous as cantons, which are not internationally recognized.

Turkey considers the PYD to be an offshoot of the PKK, which has for decades waged a bloody insurgency in the country. The PKK is listed as a terrorist group by Turkey, the U.S. and EU.

"This time the people of the bombed places were ethnically cleansed by the PYD and YGP, as well as ISIS, these are strange relationships and alliances. … We are seeing signs of work that is underway on a formula to bring together the cantons," Arınç said. He said that Turkey would not close its borders to Syrians seeking refuge, as their lives were in danger. "Turkey is the only country that opens it arms to the oppressed," Arınç said, adding that there are currently 1.6 million Syrian refugees in the country.

He also said that the situation was "not something sustainable" and added: "The free world, Western countries, democratic countries that believe in human rights, must surely know that the task [to aid refugees] also falls on them."

The Syrian Observatory for Human Rights also confirmed Tuesday that the YPG has seized control of the town along with a contingent from the Free Syrian Army. The takeover of Tal Abyad marks the biggest setback yet to ISIS, which lost a key supply line for its nearby capital in Raqqah. It deprives the group of a direct route for bringing in foreign militants and supplies, and links the Kurds' two fronts, putting even more pressure on Raqqah.

More than a dozen Syrian opposition groups on Monday urged the PYD in Syria to stop committing "ethnic cleansing" against Arabs and Turkmens in northern Syria.

The statement came after thousands of Syrian refugees streamed into Turkey's Şanlıurfa province through the Akçakale crossing on the Syrian-Turkish border on Sunday, fleeing the clashes between Kurds and ISIS. The issued statement claimed: "YPG forces have implemented a new sectarian and ethnic cleansing campaign against Sunni Arabs and Turkmens under the cover of coalition airstrikes, which have contributed to the bombardment, terrorizing civilians and forcing them to flee their villages."

The operation against ISIS has raised some concerns for Ankara as well, as while it purportedly aims to push ISIS militants out of Tal Abyad, it has also forced ethnic Turkmens and Arabs out, leading them to evacuate the town.

Ankara, which considers YPG fighters to be terrorists, is worried that the vacated town will be filled with the PYD's YPG forces and their presence close to the Turkish border could put its security under threat. President Recep Tayyip Erdoğan on Saturday voiced his concern over a demographic change in the region and expressed his reservations about the operation, which he doubts only targets ISIS.
Last Update: Jun 16, 2015 10:42 pm
RELATED TOPICS