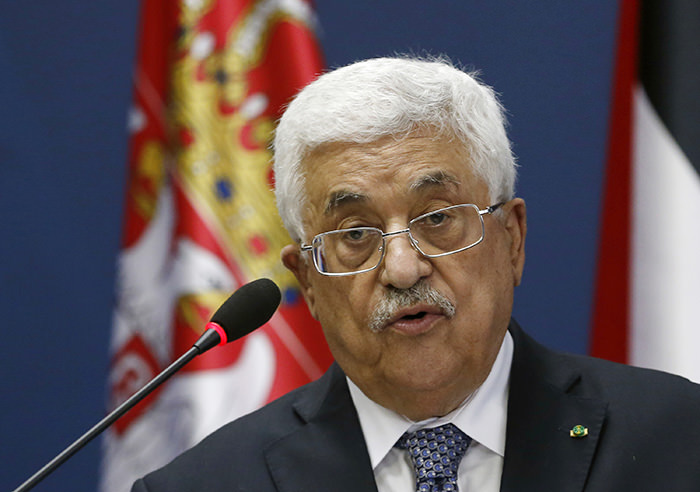 |AP Photo
by Compiled from Wire Services Jun 17, 2015 12:00 am
The Palestinian unity government formed last year in a bid to heal rifts between Hamas and president Mahmud Abbas's Fatah party resigned on Wednesday, an official said.

"Hamdallah handed his resignation to Abbas and Abbas ordered him to form a new government," Nimr Hammad, an adviser to Abbas, told AFP, referring to prime minister Rami Hamdallah.

Discussions to form a new government would include consultations with the various Palestinian factions, including Hamas, he said.

Hamas said on Wednesday it rejected any unilateral dissolution of the Palestinian unity government after senior officials reported that president Mahmud Abbas announced it would resign.

"Hamas rejects any one-sided change in the government without the agreement of all parties," Hamas spokesman Sami Abu Zuhri told AFP.

The Palestinian government will resign with 24 hours, president Mahmud Abbas announced late Tuesday as a dispute over the governance of Gaza came to a head.

Government officials did not confirm the planned resignation, but did acknowledge that such a move has been under discussion for several months over the cabinet's inability to operate in the Hamas-run Gaza Strip.

The government's inability to exert its authority in Gaza has been a major point of internal dispute between Fatah and Hamas.

It has also slowed down the vital process of rebuilding Gaza after last summer's devastating war.

The government had been expected to play a key role in the reconstruction of the territory by reasserting its authority in Gaza and taking over the border crossings with Israel and Egypt.

The 40-strong delegation, including eight ministers, arrived in Gaza on April 19 for a week-long trip but was forced to leave a day later after Hamas accused the officials of bias in resolving a dispute over employees' salaries.

The formation of the consensus government was the first fruit of an April 2014 reconciliation agreement between Hamas and Fatah which sought to end seven years of bad blood between the two Palestinian movements.
Last Update: Jun 17, 2015 2:43 pm
RELATED TOPICS